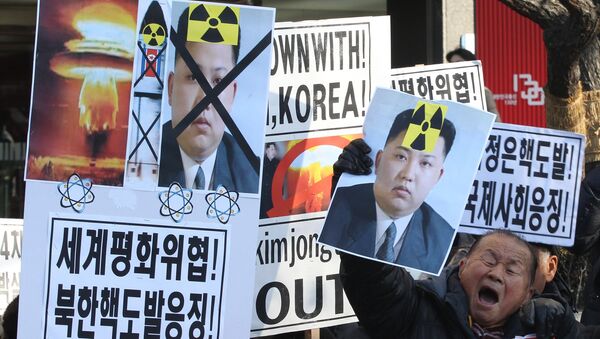 The troubling report highlights the recent escalation in provocations by the "Hermit Kingdom" to the north, including a purported hydrogen bomb test over the Pacific Ocean earlier this year and the testing of a satellite-based ballistic missile system with capabilities extending potentially as far as the US mainland.

Warnings Come as South Gears up for Elections, Calls For Surveillance on Private Communications

South Korea’s liberal opposition parties, however, question the veracity and intent of the NIS report. Opposition leaders note that today’s warning comes less than two months ahead of parliamentary elections in April.

The dire NIS assessment also comes at a time when President Park’s ruling Saenrui Party aims to push through sweeping new surveillance laws providing the government with the power to actively monitor the private communications of South Koreans citizens.

Beijing Calls on US, North Korea to Exercise Restraint

Opposition leaders assert that South Korea’s intelligence agency will use these capabilities to spy on dissenting political organizations and individuals.

Domestically, the NIS has failed to shed the reputation of being an instrument of political control and suppression by ruling officials.

Facilitating growing tensions is the expansion of the US military presence in the Pacific. South Korea’s upcoming military drills will be the largest ever, according to the country’s defense minister. The annual military exercises will include 15,000 US troops, more than double the normal American involvement.

Additionally, US and South Korean officials have contemplated deploying a complex missile defense system, the Terminal High-Altitude Area Defense, in South Korea, claiming a need to detect and destroy potential North Korean missiles said to be trained on Seoul.

North Korea’s ally China, along with Russia, caution against deploying the defense system, noting it could allow the US to spy on the military capabilities of their respective countries, and threaten the global balance of power.

Further, the US has done a series of flyovers of South Korean airspace over the past two weeks with F-22 stealth fighters and nuclear-capable bombers to signal their commitment to the South’s security.

President Barack Obama has also recently signed a new and more stringent round of economic sanctions against the North Korean government, at a time when international observers question whether economic despair may collapse the regime of the young North Korean dictator, creating the risk of destabilization in a military dictatorship with nuclear capability.

Pyongyang officials warn, as they traditionally do, that these measures are no more than clear preparations for an invasion of their country by the South. On Friday, North Korea’s leader Kim Jong-Un responded by announcing plans for more ballistic missile tests.

With a complex history of war, stalemate and distrust stoked by domestic political challenges in both the South and the North, international officials see little hope for tensions to subside anytime soon.