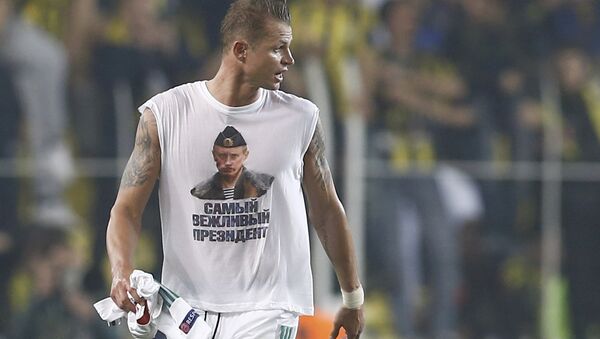 A Russian midfielder from football club Lokomotiv Moscow could be benched for displaying a shirt picturing President Vladimir Putin after his team was defeated by Turkey’s Fenerbahce, a source said Wednesday.

Feat of Wonder & SuperIbra: Zlatan Scores Another Mind-Boggling Goal
MOSCOW (Sputnik) — Fenerbahce beat Lokomotiv 2:0 in the Union of European Football Associations (UEFA)’s Europa League fixture on Tuesday. After the game, Russia’s Dmitri Tarasov approached the Russian team's fans and pulled off his team shirt to reveal a second one with Putin’s face on it and words reading "the most polite president."

"This is a clear breach of disciplinary regulations and an obvious provocation," a source in the European football’s governing body told R-Sport.

According to the source, the 28-year-old faces a long time off the field for at least 10 games and could bring additional penalties for his football club.

Return of the King: Rivaldo & Son Score Three Goals in Brazilian League
Tarasov’s behavior could be a violation of Article 14 in the UEFA Disciplinary Regulations index, which punishes "discriminatory conduct and propaganda," specifically all forms of ideological, political and religious propaganda.

Fenerbahce and Lokomotiv are scheduled to face off again in Moscow on February 25.

Relations between Russia and Turkey soured last year after a Turkish fighter shot down a Russian jet over Syria over what Ankara claims was a violation of its airspace. Moscow denied the allegation.