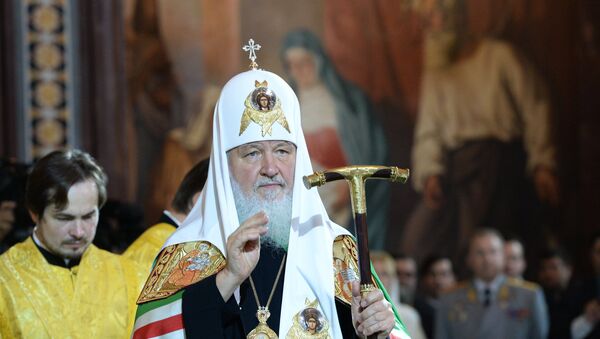 Patriarch Kirill urged the world to unite in a fight against terrorism.

ASUNCION (Sputnik) – A response to the challenge of terrorism in Syria, Iraq, other Middle Eastern countries and the rest of the world should be frank and coordinated, Russian Orthodox Church leader, Patriarch Kirill, said Wednesday.

"We have discussed with Pope Francis vexed questions of the current international life… the tragedy that takes place before our eyes in the Middle East and, first of all, in Syria and Iraq. It is no longer possible to stay silent, we need to talk together," Patriarch Kirill said at a meeting with Paraguayan President Horacio Cartes in Asuncion.

The terrorists do not limit their activities to the theater of military operations in Syria and Iraq, they blew up a Russian plane killing 240 people and staged a massacre in Paris, the patriarch noted.

"This is a common problem for the whole humanity, and therefore the response to this challenge must be coordinated, coherent and joint. Syria, and all that is going on around Syria should not be a place of potential conflict between the West and the East… Here all the parties interested in defeating terrorism forces should act together and in coordination," the patriarch noted.

These ideas formed the basis of a very important part of the declaration, signed together with Pope Francis, he stressed.

The historic meeting between the heads of the Roman Catholic and the Russian Orthodox churches took place at Havana’s Jose Marti International Airport on Friday. The event marks the first time a Catholic pope and an Orthodox patriarch meet since Christianity split into western and eastern branches in 1054.