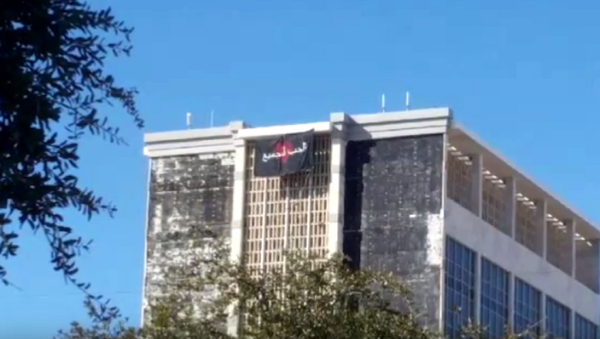 The mayor of Lubbock, Texas, is calling for a Homeland Security investigation over a large banner seen hanging from a city building on Monday which featured the phrase “love is for all” written in Arabic over a large red heart.

Student Arrested for Studying Arabic Settles Lawsuit with Police
The message of love, commonly used around Valentine’s Day, was hanging from the publicly owned Citizen’s Tower in Lubbock’s downtown. It prompted officials to shut down traffic in a bizarre overreaction — and apparent criminalization of an entire language.

Despite the clearly positive message of the banner, Mayor Glen Robertson instructed officials to remove the banner and begin an investigation.

"It has been brought to my attention that an Arabic flag has been hung from one of the upper floors of the Omni building," Robertson said in a letter sent to City Manager James Loomis. "I am requesting that the flag be removed immediately, that we get an accurate translation of the flag, and that Chief Stevens notify the Department of Homeland Security, the FBI, and our Lubbock County Sheriff's Department."

"I fully understand that we must gather more facts before we make a knee jerk reaction but I am concerned on several levels," he added.

‘Unhinged’ Anti-Muslim Oregon Militant Ritzheimer Tracked by FBI for Months
However, Robertson continued implying that residents of the city were unsafe in a public statement. “It is premature to come to conclusions before we can gather more facts but I believe that we must take this situation seriously in light of current national and international events,” he said.

Reactions on social media were mixed, with many residents mocking the fear spread by their officials. Others, such as Mando Najera, posted photos of the flag to her Facebook account with the caption, “burn that f*ckin flag only flag that should be waving is United States flag.”

The banner, which was held in place with cinderblocks, was taken down shortly after noon on Monday, and authorities have not yet identified the person trying to spread a little love after Valentine’s Day.