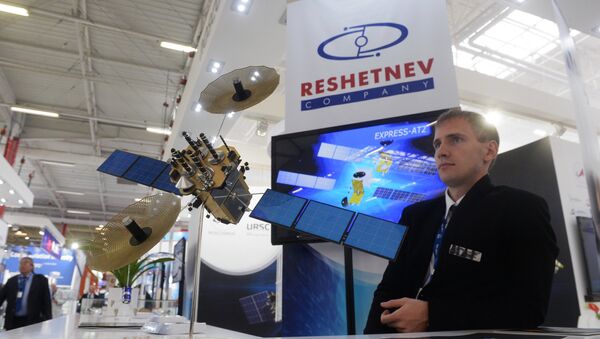 The company aims to get in touch with prospective customers, establish new contacts and promote its products to reach out the dynamically developing Asian market.

MOSCOW/SINGAPORE (Sputnik) — The Information Satellite Systems (ISS) Company named after academician M.F. Reshetnev for the first time takes part in the Singapore Airshow 2016, where it presents Russian satellites of its own manufacturing, the company announced Tuesday.

"It is the first time ISS-Reshetnev Company is showcasing its products at this Asia’s largest aerospace industry event. At the company’s stand, visiting specialists and exhibitors will have an opportunity to learn more about ISS-Reshetnev’s achievements and capabilities in the field of building satellites for a diverse range of applications," the company said in a statement.

The enterprise exhibits the models of satellites that are currently carrying out their missions in orbits, in particular communications satellites Express-AM5 and Gonets-M, a navigation satellite Glonass-K, a data-relay satellite Lutch-5A and a model of a satellite built on the ISS-Reshetnev advanced platform Express-1000.

Russia
Russia Developing New Global Positioning Spacecraft for Glonass
"ISS-Reshetnev delegates led by Nikolay Testoyedov, director general of the company, are going to hold a series of meetings to get acquainted with satellite operators and space technology providers of the Asia-Pacific region," the statement added.

The company aims to get in touch with prospective customers, establish new contacts and promote its products to reach out the dynamically developing Asian market, according to the statement.

The Singapore Airshow, formerly known as Changi International Airshow, kicked off earlier on Tuesday and will last until Sunday, February 21.