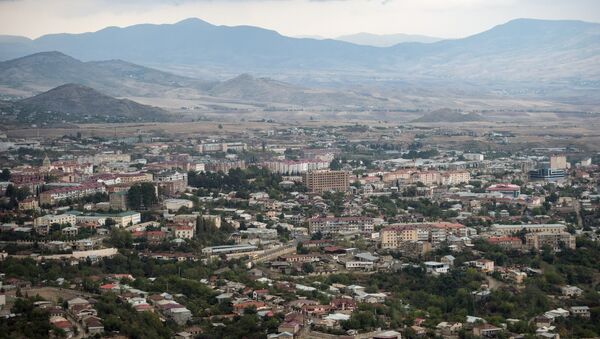 NATO backs efforts of the Organization for Security and Cooperating in Europe (OSCE) to resolve the decades-old row between Azerbaijan and Armenia over Nagorno-Karabakh, the bloc’s envoy for the region said Tuesday.

Iran Ready to Mediate Nagorno-Karabakh Conflict Resolution - Deputy FM
BAKU (Sputnik) — Speaking at a press conference in the Azeri capital Baku, NATO's envoy for the Caucasus and Central Asia, James Appathurai, said that the military bloc had no direct role in the negotiations aimed at settling the conflict over the mountainous Nagorno-Karabakh region.

However, NATO supports efforts made by OSCE’s Minsk group, known for spearheading the peace process in eastern Ukraine, to resolve the conflict peacefully. The group is co-chaired by Russia, France and the United States.

The row between Armenia and Azerbaijan erupted in 1988 when the Armenian-dominated autonomous region left the Azerbaijan Soviet Socialist Republic and proclaimed independence after the Soviet collapse in 1991.

This triggered a war that lasted until a Russia-brokered ceasefire was signed in 1994. In September 2015, the conflict escalated, with the sides blaming each other for violating the truce.