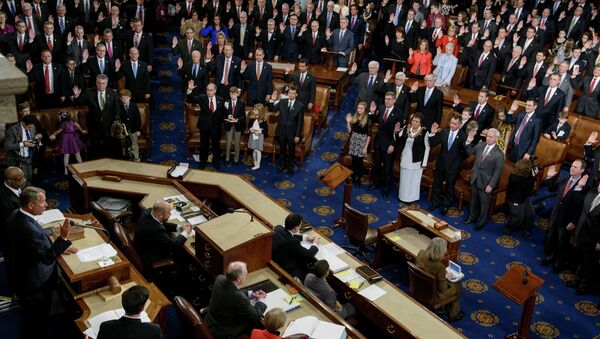 © AFP 2021 / BRENDAN SMIALOWSKI
Subscribe
In the midst of an election year in the United States, Radio Sputnik’s Brian Becker is joined by investigative journalist and filmmaker John Pilger to discuss the idea that “extremists” run Western political systems, and the important role of whistleblowers.

"This is the first time that a…major international organization, an official body, has had the opportunity to examine all of the salient information to do with the Assange case," Pilger tells Loud & Clear host Brian Becker, referring to a recent ruling by the United Nations that the WikiLeaks founder is being "arbitrarily held."

"This is the first time all that evidence, all those facts, have been brought in one arena and examined, and the very clear judgement…shows the extent of not only the miscarriage of justice that Julian Assange has had to endure, but the attack on him, on WikiLeaks, and indeed, on all whistleblowers, truth-tellers, who push down the façade of propaganda."

But the treatment of Julian Assange by the governments of the West is no surprise, given the draconian methods by both the US and UK, not only domestically, but also abroad.

"Most of the calculations are that perhaps a million people died during that decade, leading up to the beginning of Iraq’s holocaust, when shock-and-awe began in 2003."

The tragedy of the Iraq War is the responsibility of elected Western government representatives, and, while many recognize that the invasion of Iraq was a mistake, violence continues in other countries.

"Yemen, where half the children are malnourished, is being pounded and has been pounded with American cluster weapons for the last eight, nine months, almost a year, with the Saudi’s let off the leash to do what they have wanted to do for a long time, that is to destroy Yemen.

"This landscape of violence really has come out of the beginning of a particular kind of extremism in Washington," he adds. "I think there was a military coup, of a kind, in Washington."

Pilger describes the enormous influence of the Pentagon in American political circles.

"We need to understand that there is a real extremism now rampant in our so-called democratic societies."

In the future, he asserts, this extremism is likely to grow.

"We’re going through a period of extremism, but we don’t apply that word, that concept, to our own governments. And yet the evidence is there before us."

The NATO bombing of Libya, he says, is a prime example.

"This was a cohesive, independent state in the Middle East, a state created from warring and potentially warring tribal groups as a single entity, and it was destroyed by 'us,'" he says, referring to the United States and its allies.

While there are signs of dissatisfaction in the United States – the rise of Democratic presidential candidate Bernie Sanders, for instance – Pilger remains skeptical that anti-war movements will have any real effect on Washington.

"The great anti-war movement…had the rug pulled from beneath by the election of Barack Obama. We had all that nonsense about 'hope,' and if we’re running through that script again with Bernie Sanders, I think we should stop and pause and really consider," he says.

Pilger discusses his latest film, “Utopia,” covering racism in both America and Australia, and the need to look beyond single-issue politics.

000000
Popular comments
Jet fuel can't melt steel beams, That is indeed the foundation of it all.
Randall Lee Hilburn
16 February 2016, 23:57 GMT
000000
michael, They can only get peoples attention and support anymore by playing to their most base instincts. Otherwise people would be just to jaded to even care.
Randall Lee Hilburn
17 February 2016, 00:01 GMT
000000
Newsfeed
0
New firstOld first
loader
LIVE
Заголовок открываемого материала
Access to the chat has been blocked for violating the rules . You will be able to participate again through:∞. If you do not agree with the blocking, please use the feedback form
The discussion is closed. You can participate in the discussion within 24 hours after the publication of the article.
To participate in the discussion
log in or register
loader
Chats
Заголовок открываемого материала
Worldwide
InternationalEnglishEnglishMundoEspañolSpanish
Europe
DeutschlandDeutschGermanFranceFrançaisFrenchΕλλάδαΕλληνικάGreekItaliaItalianoItalianČeská republikaČeštinaCzechPolskaPolskiPolishСрбиjаСрпскиSerbianLatvijaLatviešuLatvianLietuvaLietuviųLithuanianMoldovaMoldoveneascăMoldavianБеларусьБеларускiBelarusian
Transcaucasia
ԱրմենիաՀայերենArmenianАҧсныАҧсышәалаAbkhazХуссар ИрыстонИронауОssetianსაქართველოქართულიGeorgianAzərbaycanАzərbaycancaAzerbaijani
Middle East
Sputnik عربيArabicArabicTürkiyeTürkçeTurkishSputnik ایرانPersianPersianSputnik افغانستانDariDari
Central Asia
ҚазақстанҚазақ тіліKazakhКыргызстанКыргызчаKyrgyzOʻzbekistonЎзбекчаUzbekТоҷикистонТоҷикӣTajik
East & Southeast Asia
Việt NamTiếng ViệtVietnamese日本日本語Japanese中国中文Chinese
South America
BrasilPortuguêsPortuguese
NewsfeedBreaking
04:01 GMTFrom Photo-Ops to Afghan Withdrawal: Trump & Milley's Most High-Profile Spats
03:59 GMTGraphic Design: The Chilling Art of a School Shooter
02:54 GMTDemocrats' Anti-Trump Playbook Could Be a Losing Strategy for 2022 Midterm Elections
01:44 GMTBiden White House to Reportedly Announce Diplomatic Boycott of Beijing Olympics
01:07 GMTGambia’s Incumbent Leader Wins Presidential Election - IEC
00:31 GMTOmicron Mitigation: What Travelers to the US Need to Know Beginning Monday
YesterdayFauci Speechless After US Senator Asserts Epidemiologist 'Overhyped' COVID-19 Pandemic
YesterdayFrench Presidential Candidate Zemmour Attacked at Villepinte Rally - Reports
YesterdayTrump Slams Top US General Milley as 'F**king Idiot' Over Afghanistan Withdrawal
YesterdayWWII Veteran And Longtime US Senator Bob Dole Dies at 98
YesterdayIran Blames US Stubbornness on Sanctions for Breakdown of Vienna Nuke Talks
YesterdayZemmour Says He 'Would Like' to Withdraw France From NATO
YesterdayIsraeli Deputy Defence Minister Dodges Question About Tel Aviv's Complicity in Natanz Blast
YesterdayCorridors of POWDER: Brits React to News of Drug Sniffer Dogs in Parliament
YesterdayMercedes' Hamilton Takes Win in First Saudi Arabian GP After Chaotic Battle With Verstappen
YesterdayTucker Carlson Was Reportedly Friends With Hunter Biden, Intervened in Media Report on His Behalf
YesterdayPutin: People Vaccinated With Sputnik V Should Not Be Deprived of Right to Travel
YesterdayPolish Authorities Officially Confirm Detention of Russian Ship Ruslana
YesterdayBelgian Police Use Tear Gas After Clashes With COVID-19 Protesters Broke Out in Brussels - VIDEO
YesterdayTrump's Media Company Says Raised $1Bln From Investors