Some 300 Militants, Trucks With Arms Move to Syria's Tel Rifaat From Turkey 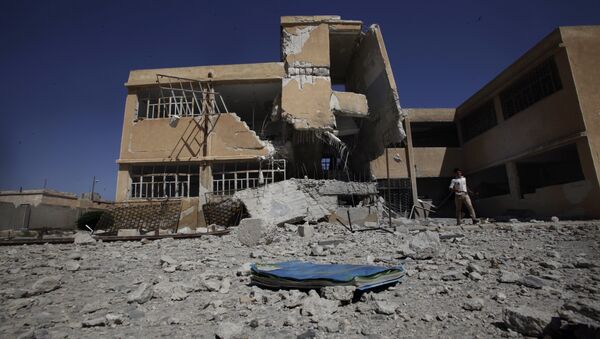 Some 300 militants and trucks with ammo rushed from Turkey to the Syrian city of Tel Rifaat in Aleppo but their attempt was disrupted by airstrikes, a source said. Kurdish forces have been storming the city, besieged by terrorists.

BEIRUT (Sputnik) – A group of approximately 300 militants with trucks laden with weapons attempted to break into the northern Syrian city of Tel Rifaat in Aleppo from Turkey, but most of the militants were killed, a source in the Kurdish self-defense forces said Monday.

“Reinforcements were sent to Tel Rifaat from Turkish territory. Around 300 militants and weapons. Airstrikes were conducted against the convoy heading out of Turkey on the Azaz-Tel Rifaat road. Most of the reinforcements were destroyed, some were able to reach the city,” the source told RIA Novosti.

Over the weekend, Turkey demanded the the Syrian Kurdish militia withdraw from the areas on Syria's northern border they have been in control of. When the fighters refused, Turkey-backed armed rebels crossed into Syria from Turkey to support rebels fighting Kurds near Tel Rifaat.

It was reported earlier that Kurdish Self-Defense Forces began storming the city of Tel Rifaat besieged by terrorists and located approximately 12 miles from the border with Turkey.

On Sunday, Al Mayadeen TV reported that some 400 militants of the Sham Legion militant group arrived in the Syrian province of Aleppo through the Turkish territory to help al-Nusra Front terrorist group.

Syrian Kurds have also been fighting against Daesh, which is outlawed in many countries including Russia, for years and have already liberated vast Syrian territories from Daesh control.

The Kurds comprise ancient tribal groups, which are currently living in parts of Turkey, Iran, Iraq and Syria. In Turkey, Kurds represent the largest ethnic minority, and are striving to create their own independent state, which is not welcomed by Ankara.