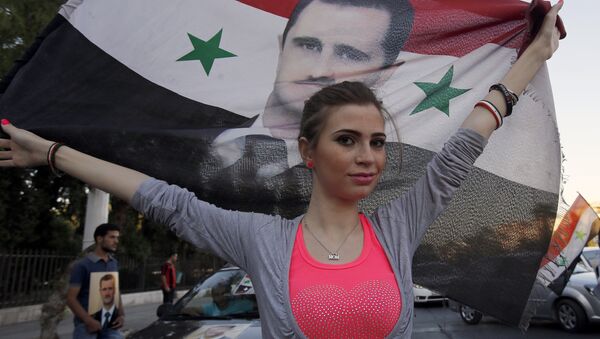 Syrian towns Nubl and al-Zahra in Northern Aleppo province had been occupied by the Free Syrian Army since July, 2012. After their liberation on the February 3rd and following improvement of their living conditions, residents are expressing their gratitude to Russia, Iran and Hezbollah.

Turkish Army Shelling Kurdish Barracks in Northern Syria - Source
Only about two weeks ago, the two strategically important towns were under the control of various rebel factions, including the al-Nusra Front. According to reports from locals, for more than three years they had to conquer fear and learn how to survive without enough aid, but with constant shelling in the background.

The Syrian Army, backed by pro-Iranian militias and Russia, which has been conducting air strikes targeting Daesh positions in the country, was welcomed with open arms by the residents that support the Syrian government and Bashar Assad. Streets are now decorated with posters of Hezbollah leader Hassan Nasrallah and Iran's Supreme Leader Ayatollah Ali Khamenei along with photographs of the Syrian President beaming down from the front of the town hall in Nubl and hanging outside its main mosque.

"Thank you Russia! Thank you Hezbollah! Thank you Iran!" a resident shouted on the street, as reported by CNN.

According to the Syrian Red Crescent, it delivered humanitarian relief to Nubl and Al Zahra earlier this week. Reportedly, the living conditions have significantly improved there in just two weeks, with stores and markets becoming better stocked.

Time for Washington to Admit 'Russia Is Right on Syria'
This is a victory of great importance for the Syrian Army, as al-Zahra and Nubl are located between the Turkish border and parts of Aleppo that are controlled by insurgents. This leaves the terrorists in Northern Aleppo with no supply routes. The towns will become the main centers for military operations by government forces in the north of Syria.

What's just as important is that the lifting of the sieges bolstered morale among pro-government forces, which now believe there are capable of winning back any territory, occupied by opposition.

Russia continues carrying air strikes against terrorist targets across Syria, including those in Aleppo province.