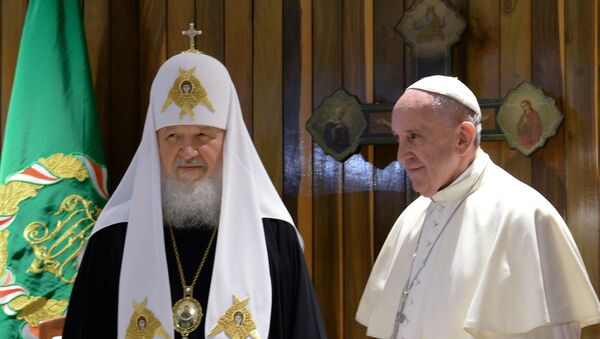 MOSCOW (Sputnik), Alexander Mosesov – Patriarch Kirill of Moscow and All Russia and Pope Francis spoke for over three hours in Havana, Cuba, on Friday for the first time since Christianity split into western and eastern branches in 1054.

In a joint statement issued later, the two church leaders called on the world community to prevent the expulsion of persecuted Christians from the Middle East.

"The meeting marks a big step forward in Catholic-Orthodox relations," Catholic University of America Professor of Systematic Theology and Ecumenism Msgr. Paul McPartlan asserted Sunday. "This meeting means that we now have strong, practical relations between Rome and all of the major Orthodox churches, and we can move forward together."

The joint declaration indicated how "deeply united" Pope Francis and Patriarch Kirill are in recognizing the suffering "because of a lack of reconciliation and respect."

"They showed how much the world needs Christ, and spoke with great love and concern for the good of humanity and especially for the welfare of our Christian brothers and sisters who are being persecuted," McPartlan stressed, lauding their "noble, urgent and prophetic" message.

"Today Pope Francis and Patriarch Kirill have publicly recognized each other’s moral authority. While the two churches will not unite anytime soon, this meeting points the way to greater friendliness and cooperation," Burgess argued. "Nothing that they said makes me cynical. On the contrary, it gives me great hope that Christians from different churches and traditions can speak with one voice."

"The message was written with full awareness of the very real differences between the Roman Catholic and Orthodox Churches but at the same time affirmed the common cultural legacy that remains from the periods when Rome was still in communion with her Orthodox brethren," Jacobse observed.

The importance of the two denominational leaders' meeting was highlighted in the joint statement, which lamented "the transformation of some countries into secularized societies, estranged from all reference to God."

"Russia has firsthand knowledge of the damage secular forces can bring while the Christian West seems to be rushing headlong into the kind of secular darkness from which Russia is emerging," Jacobse stressed.

Patriarch Kirill and Pope Francis’ meeting last week was ever more pressing to highlight the "shared cultural legacy" of Christianity amid what he termed a "secular assault" against the religion.