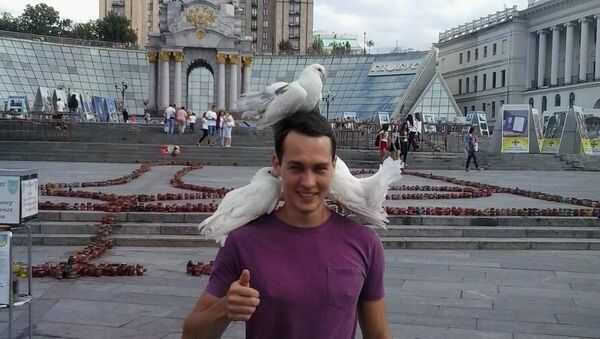 © Blogger photo Nadezhda Ilyna
Subscribe
Nadezhda Ilyna
All materials
Michal is one of the most active antifascists in Czech Republic. You can meet him on anti-NATO rallies in Czech and Slovakia, on events about support of Novorossiya and against fascism in Ukraine. Not long time ago Michal visited Ukraine. We met him to discuss his trip to Ukraine and plans.

- Tell us, please, why did you decide to visit Ukraine?

— I wanted to see by myself what is going on in Ukraine, to hear what people of Ukraine think about Maidan, new government and war with Novorossiya.

-What can you say about your impression from Ukraine?

— Well, it's different. I've visited Lvov, Ternopol, Kiev, Odessa and Mariupol. Yes, I should admit that the majority in Western Ukraine are against Russia and Russians. Some even call them "trash" and "drug addicted". There was this funny moment at the hotel when a girl at the front desk talked with us only in Ukrainian. For her it was obvious that we should know Ukrainian so she didn't even try to talk in English with us.

But I can't say that western Ukrainians support Poroshenko and his government. They support only the EU and desperately want to join it. You can see many EU flags in many places in West Ukraine.

In Odessa I didn't see EU flags at all. We met and spent several days with a lot of pro-Russian people there and we visited Kulikovo Polye. I can tell that, even after the extremist terrorist act of May 2nd 2014 these people are ready to fight for justice, their spirit is not broken. I want to believe that they won't see another insane attack by Ukrainian far-right extremists.

In Mariupol I've spent just three days. I saw a lot of soldiers there, everywhere.

- What can you tell us about the future of the anti-NATO movement in Czech and Slovakia?

— Surely anti-NATO feelings will rise in our society. People have started to realize that NATO is not here to safeguard us, but to provocate another conflict or destroy another country considered "evil" by the USA in yet another of their illegal wars.

Of course that's not bad for the US, they'll get profit from their wars and they're too far from the zone of NATO wars and conflicts to be negatively affected. We can't say the same for us Europeans — we don't have an ocean between us and the Middle East.

Not long ago, NATO even attacked a European country, Yugoslavia. What can we say about them today? Can we review Bosnia, Serbia, Kosovo as successful results of this war? I can't. It is difficult for me to say that NATO policy is pro-European, especially pro-Czech. Because of US/EU policy we already have millions of migrants from Ukraine and a migrant crisis from those coming from the Middle East. But it is not enough for them. They want to destroy Belarus and Russia also. And the question is Where? Where is there a successful example of their policy? Why, after all their failures they dare to call us into another conflict?

- What thoughts do you have about future of Novorossiya and Ukraine?

— I think difficult times will come for Ukraine and Novorossiya. I don't think that Ukraine is capable of  becoming EU member  in close future. In my opinion, Novorossiya will be like Trasnistria 2.0. Of course, with benefits because it shares common borders with Russia, that's why it wont be easy for west to install there a blockade.

-What is your plans for future? Maybe you want to visit Donbass too?

— In my plans to visit Russia this summer. Of course, I want to see, also Novorossiya but it will depend on my financial opportunities. Also, I want actively participate in public life of Czech and Slovakia.

000000
Popular comments
This is interesting. Thank you Nadezhda Ilyna. This interview gives me hope, especially where he states "People have started to realize that NATO is not here to safeguard us". Also of interest is the attitude expressed by the common person in Western Ukraine, which is difficult to comprehend when they demand that others learn Ukrainian language but dearly hope to enter the EU. Do they think all of the EU must learn Ukrainian language? I think the western Ukraine will be dark and cold for a long time. Maybe another Poland. It is their own doing. I feel no pity for them, only hope for the Donbass!