Russia Ready for 'Advanced Relations' With EU, US - PM Medvedev 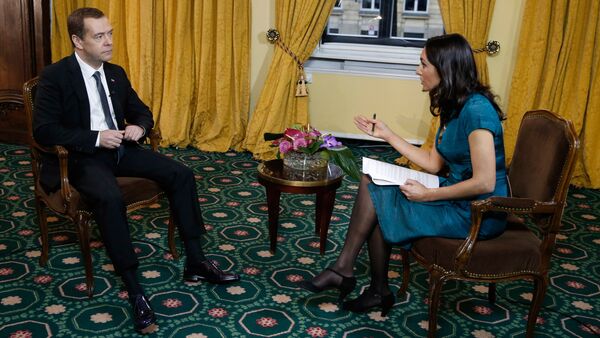 Moscow is ready for advanced relations with Washington and Brussels, but they should be the ones to make the first move in reconciliation, Russian Prime Minister Dmitry Medvedev said.

MOSCOW (Sputnik) — According to Medvedev, Moscow is ready to discuss any issues, but the Western countries should be the ones to make the first step.

"We are ready for this, we want sound, advanced relations with both" the European Union and the United States, Medvedev told the Euronews television channel.

EU Cannot Allow New 'Cold War' With Russia - Austrian FM
"These continuing tensions aren’t doing us any good. But if we are told that they no longer want us around, of course, the first steps towards reconciliation should be taken by those who initiated the alienation," Medvedev stressed.

When commenting on the relations between Russia and the United States, Medvedev said that the ties have been damaged, while a so-called "reset" can only be on an equal basis.

"If something is to be reset, it should be done on a fundamentally different basis. What kind of basis? Equitable, fair, solid basis for relations, considering that Russia is not the only nation that needs this – the European Union and the United States need it as well."

The prime minister lamented that the relations with the United States have "deteriorated again, they have been damaged, and they are worse than they had been before."

The Russian prime minister said that Western partners' requests to restore cooperation with Russia province that anti-Moscow sanctions are meaningless.

“Then after some time, someone whispers in our ear that they actually want to revive relations, so could we start cooperating on one issue or another? What does this mean? First, that the initial decision to cease cooperation in a most difficult international situation, where we all need each other, was meaningless to begin with. Second, it becomes necessary to backtrack after some time.”

EU States Want to Lift Anti-Russia Sanctions - Source
He added that this is not the first time such scenario takes place.

"As soon as something happens in the global agenda with Russia’s participation, NATO immediately starts blowing smoke, pouting, and says, that’s it, we’re done, we’re not talking with you anymore, we’re suspending our relations. This happened after the events in Georgia, then after the events in Ukraine. We say, all right, that’s your business, if you prefer to have them suspended," Medveded pointed out.

He reminded that those imposing sanctions incur serious economic losses.

"We had a trade turnover with the European Union at 450 billion euros [over $506,5 billion at the current exchange rate]. It was 450 billion! Now it is down to 217. Why don’t they ask the people in the EU who are employed by the various companies that used to make products for Russia – how do they like all of this?" Medvedev said.

He added that those who imposed anti-Russia sanction "will have to have the courage to say, guys, we’ll just scrap all this from day X, and could you please reciprocate by lifting your response measures as well."

"That would be the right approach," Medvedev pointed out.