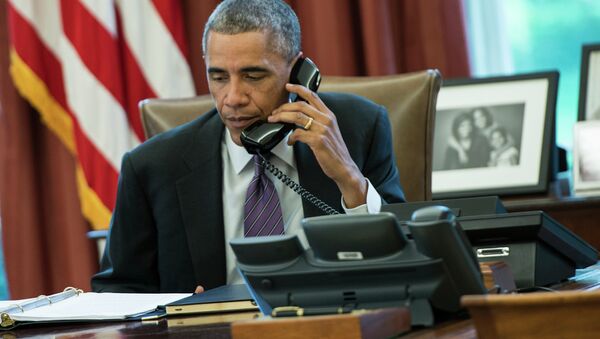 "President Obama spoke by phone yesterday with President Vladimir Putin of Russia to discuss the decisions and agreements made at the February 11 meeting of the International Syria Support Group (ISSG) and to stress the importance of rapidly implementing humanitarian access to besieged areas of Syria and initiating a nationwide cessation of hostilities," the statement reads.

The White House added that the leaders agreed to cooperate within the work of the ISSG.

The ISSG meeting on Thursday resulted in the adoption of a final communique that called for humanitarian access to be provided swiftly to all besieged areas in Syria and set a one-week deadline for measures to be implemented to end the hostilities in the country.

The ISSG was formed in November shortly after the beginning of the Syria peace talks in Vienna as an international format aiming to resolve the internal crisis in Syria, where a civil war has been ongoing since 2011, with forces loyal to Syrian President Bashar Assad fighting against several opposition factions and extremists.

The format currently involves Russia, the Arab League countries, the European Union and some of its member states, as well as China, Iran, Turkey, the United Nations and the United States.