Another Day, Another Billion for Color Revolutions Near Russia's Borders 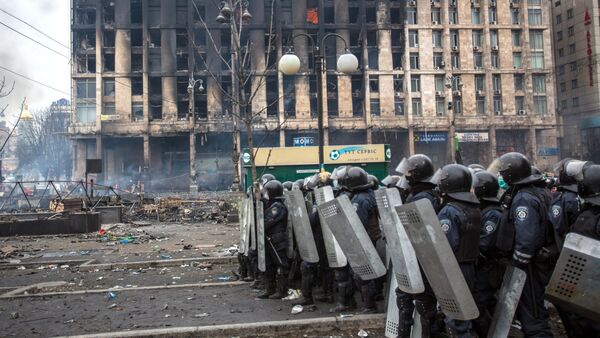 Last week, the Obama administration proposed its final, 2017 fiscal year budget proposal to Congress. Among the proposed outlays is a State Department request for nearly a billion dollars to counter "Russian aggression" and "promote democracy" in the former Soviet Union. In other words, Washington thinks the region needs more color revolutions.

On Tuesday, the State Department and USAID held a special joint briefing, laying out a $50.1 billion spending request for 2017, including $953 million in "critical support for Ukraine and surrounding countries in Europe, Eurasia and Central Asia to counter Russian aggression through foreign assistance and public diplomacy."

The spending would be separate from the proposed $3.4 billion (up from $789 million in 2016), provided by the so-called "European Reassurance Initiative," which aims for "a significant reinvestment in the US military presence in Europe after decades of gradual withdrawal" to counter "the growing threat Russia poses to long-term US national security interests in Europe and beyond."

With most of the Western media basically ignoring the plans and focusing on other aspects of the budget's whopping $4 trillion in proposed spending, Russian security analysts, naturally, couldn't let this 'minor detail' simply slip by unnoticed, given that the spending proposal is openly oriented against Russia.

The Republic Of Macedonia: Hybrid War Redux?
"It's not difficult to guess what is implied by [the proposed spending for] 'democratization,'" the journalist noted. "However, several questions arise. Firstly, this year, the State Department has already allocated $117 million 'to support democracy' in Ukraine, and $51 million for Moldova and Georgia. But in these countries, so-called color revolutions have already taken place, and the Americans have already almost achieved what they set out to do."

"Secondly, it's unclear what kind of 'countering of Russian aggression' the State Department means in relation to Central Asia. Kazakhstan and Kyrgyzstan have long been oriented toward Moscow, and even joined with Russia in the common customs area of the Eurasian Economic Union. Kazakhstan, Kyrgyzstan, and Tajikistan are also part of the Collective Security Treaty Organization's unified security system. Russia has also signed a series of bilateral cooperation agreements with Uzbekistan."

The proposed spending, Ivanov notes, "assumes a serious US commitment to pursuing its [geopolitical] goals, which threatens Russia with obvious negative consequences. The question thus arises about the countermeasures our country might take in response."

"According to experts, on the eve of the coup d'état in Ukraine in 2014, over two thousand non-governmental organizations were created, from training camps for militants to various clubs of political scientists and media workers."

Putin’s 2007 Munich Speech Predicted Era of New US, Western Aggressions
Unfortunately, the journalist recalls, "Moscow relied more on the agreements reached with Ukrainian elites; the result was disastrous. Today, the question again arises about the need to work actively with the civil society of neighboring states."

Namely, the professor told the newspaper, "when Washington talks about spreading democracy, and allocates money for this purpose, it is referring to 'color revolutions' – the overthrow of undesirable regimes and the drive to bring puppets who mimic democracy to power."

"Factually, these countries find themselves under American control. Ukraine is a vivid example. Until recently, Georgia too served as a good example, with each department and ministry in the country featuring an advisor and curator from the State Department. In Ukraine, supervision is carried out through the US Embassy, and through officials loyal to Washington, charged with implementing its instructions."

Ukraine, Syria Fall Victim to Same 'Democratization' Scenario - Kremlin
As for the earmarking funds for countries which have already undergone color revolutions, Manoilo explained that the money "is allocated for the purpose of maintaining the stability of the dependent regime." This is especially true in Ukraine's case, he said. It is also meant "to ensure the loyalty of local elites."

In Georgia's case, "after Mikheil Saakashvili resigned from his post and was forced to flee the country, the American position weakened somewhat, mainly due to the perceived negativity which the color revolution had brought the country. So here, the US [spends] in order to maintain its influence. It is also possible that the US is considering ensuring the loyalty of Georgian elites by 'nourishing' cyclical color revolutions, thus carrying out a rotation of the elite."

As for Central Asia, the State Department announcement seems to indicate, according to Manoilo, "that color revolutions are planned there as well. The Americans need to see regime change in the countries which, for the most part, are oriented toward Russia. In Central Asia, Moscow has several projects geared toward integration, including the Shanghai Cooperation Organization and the CSTO. Today, the countries in the region face a difficult situation, with disintegratory processes growing among them."

Kyrgyzstan Accuses US of Scheming to Create Situation of Controlled Chaos
In Tajikistan, the professor warned, the State Department may attempt to reignite the embers of the country's civil war, which took place between 1992-1997, taking advantage of disagreements between the country's north and south. "US NGOs, which operated freely in the country until recently, are taking advantage [of discontent] among both northern and southern elites. It was not until about a year ago that President Emomali Rahmon began to restrict their activities."

In Kyrgyzstan, meanwhile, "the situation has changed little since the last color revolution. The protest mood remains strong. US NGOs and foundations have been working actively with the rural population, which is not very versed in politics, but is easy to agitate to participate in demonstrations against authorities, as the 'melon' revolution of 2010 demonstrated."

In all the countries of Central Asia, Manoilo noted, "there is the strong factor of Islamist radicalism. By and large, only the presence of Russian military bases holds back an Islamist offensive in the region."

Unfortunately, he says, "practice has shown that when it comes to overthrowing undesirable governments, the State Department easily finds a common language with even the most rabid fundamentalists. It's sufficient to recall the color revolutions of the so-called Arab Spring. It would not be out of place to presume that the US is preparing their repetition, except this time in the post-Soviet space."

"In addition to Central Asia, there is the southern Caucasus. Last summer, Armenia saw a rehearsal of a color revolution under non-political slogans – a new technology called the 'Electro-Maidan'. Armenia is a Russian ally in the South Caucasus, and the US has plans for regime change, using their methods of the so-called 'democratic transition'."

Ultimately, Manoilo warns, "by dismantling the political order in Russia's neighboring countries, the US wants to create a vacuum around our country. Simply put, this indicates a repeat of the Ukrainian scenario. After all, until very recently it was simply impossible to imagine Ukraine as a country which is hostile to Russia."

Russia
Russian National Security Strategy for 2016: Key Updated Points
Asked what measures Russia can take in order to prevent new, State Department-inspired color revolutions from breaking out on its borders, the professor suggested that "the best way to counter the phenomenon is to constantly monitor the situation, and identify preparations for color revolutions."

"After all," Manoilo noted, "preparations for coups begin covertly, over a period of several years, before protesters come out to the square. Protest movements are prepared according to a well-established pattern, and if the 'revolutionary' activity is uncovered at the preparation stage, the State Department tends to curtail its activities, due to the risk of something going wrong, or costs exceeding the allocated budget."

"Today, Russia and the countries of Central Asia coordinate their efforts within the CSTO framework to identify threats of a military nature – from Islamists and others. The same kind of coordinated work is necessary for identifying planning for the organization of color revolution. That is, there needs to be a single coordination center, and unified monitoring, intelligence and warning systems in place."

"Without question," the professor notes, "it is also necessary to expand work with civil society, especially with the youth. For this, one can rely on the governments of the countries which are at risk. But there must be a common policy –one which would help reduce the base of recruitment for the organizers of color revolutions."

Six Years After Pro-European Revolution Moldova Is a 'Captured State'
"In Ukraine, this work was not carried out. Things came to a point where the protesters were already formed into a critical mass, with which it is difficult to work, to level reasonable arguments toward, and which quickly degenerated into a state of aggression. The opportunity was missed."

"For young people," Manoilo emphasizes, "it is necessary to build social mobility, so that youth can look for opportunities and engage in constructive activity."

"The 'revolutionaries' offer young people an instant career. It is well-known that young people are anything but patient. They want to achieve social status here and now. In day-to-day life, it demands long, hard work…But the 'revolutionaries' offer something different. They say to a young man: 'Come to the square, yell against the authorities for a while, and in a week we'll give you the title of a 'hundreds' revolutionary. And a member of the 'hundreds' is someone of status, a big cheese, the girls see him as a hero. And it is through such 'little lies' that the organizers of coups attract young people. They understand the psychology of young people, and the needs they seek to satisfy, very well."

"Therefore," the political scientist notes, "it's necessary to carry out broad social work. Young people need to see their prospects for the future. And then they would not come out to any 'Maidan', no matter what someone did to urge them on."

Ultimately, Manoilo says, "this system has to be built from scratch." Unfortunately, "Russia does not have experience of work with civil society abroad."

However, "we have accumulated some experience at home. Most importantly, Russia itself has experts capable of working to counteract color revolutions. We know what to do and how. The time when everyone feared color revolutions and did not know how to react to them has passed. And so in response to the American export of 'color revolution technology', Russia can export its own technology – political stabilization."