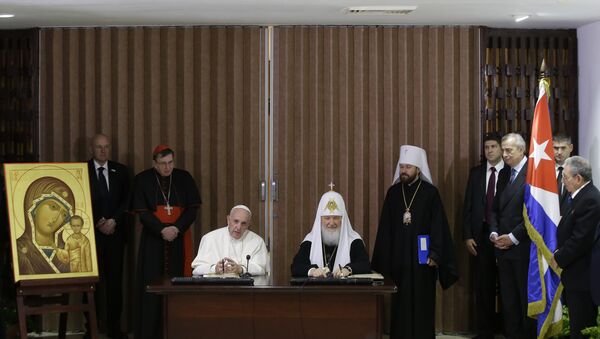 First deputy chairman of the Russian Orthodox Church's (ROC) Synodal Department for the Cooperation of Church and Society said that the meeting of Pope Francis and Russian Orthodox Patriarch Kirill confirmed possibility of two churches' political association to counter the genocide of Christians.

"The meeting of the Patriarch and the Pope in Havana, contrary to expectations, was mainly devoted to not inter-church issues. It was focused on the possibility to take joint political efforts," Schipkov told RIA Novosti.

He added that the talks confirmed possibility of the two churches' "political association for carrying out specific tasks in the fight against genocide" of Christians.

The historic meeting between the heads of the Roman Catholic Church and the Russian Orthodox Church took pace at Havana’s Jose Marti International Airport on Friday. The meeting marks the first time a Catholic pope and an Orthodox patriarch meet since Christianity split into western and eastern branches in 1054.

In the joint declaration issued following the meeting, Pope Francis and Patriarch Kirill called on the international community to prevent expulsion of Christians from the Middle East, as well as to put an end to violence and terrorism in the region.