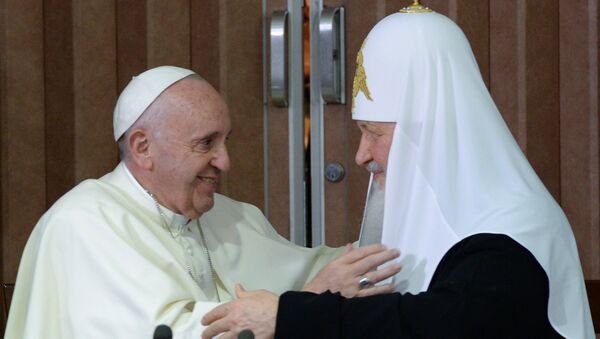 © Sputnik / Sergei Pyatakov
/
Go to the photo bank
Subscribe
Patriarch Kirill and Pope Francis met in Havana, Cuba for a historic meeting between the two churches, pledging to come together for the future of Christianity.

"We spent two hours in an open brotherly discussion, with full understanding of responsibility for our churches, for faithful people, for the future of Christianity and the future of the human civilization," Patriarch Kirill said. "It was a very constructive conversation that helped us understand each other and get a sense of each other’s positions."

Following the meeting, Pope Francis said Patriarch Kirill was open and in the spirit of unity. 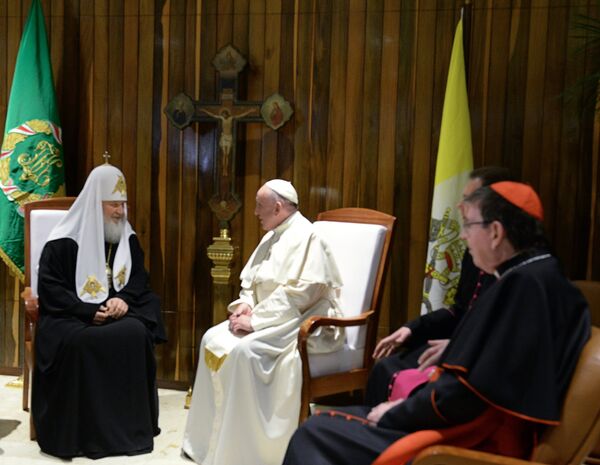 "We spoke as brothers, we have the same baptism, we are bishops, we spoke of our churches," he said.

At the conclusion of their meeting, the two religious leaders signed a joint declaration which stated "We are not competitors but brothers, and this concept must guide our mutual actions as well as those directed to the outside world."

The document also addressed the problems of capitalism. 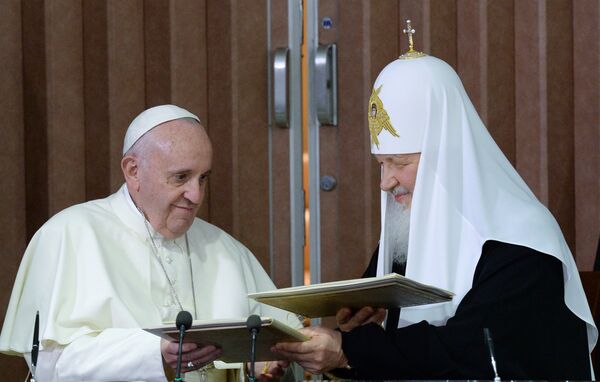 "The unrelenting consumerism of some more developed countries is gradually depleting the resources of our planet. The growing inequality in the distribution of material goods increases the feeling of the injustice of the international order that has emerged."

Both leaders expressed their concern over the decreasing significance of the traditional family, and stated their positions on euthanasia and abortion.

"The emergence of so-called euthanasia leads elderly people and the disabled begin to feel that they are a burden on their families and on society in general," the statement reads. "We call on all to respect the inalienable right to life. Millions are denied the very right to be born into the world."

Patriarch Kirill and Pope Francis agreed that Europe should remain true to its Christian roots. 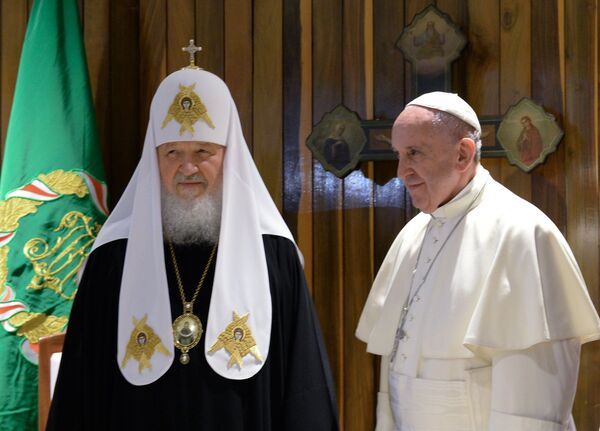 "While remaining open to the contribution of other religions to our civilization, it is our conviction that Europe must remain faithful to its Christian roots," the document reads.

"In affirming the foremost value of religious freedom, we give thanks to God for the current unprecedented renewal of the Christian faith in Russia, as well as in many other countries of Eastern Europe, formerly dominated for decades by atheist regimes. Today, the chains of militant atheism have been broken and in many places Christians can now freely confess their faith."

The document also addresses the crisis in Ukraine. 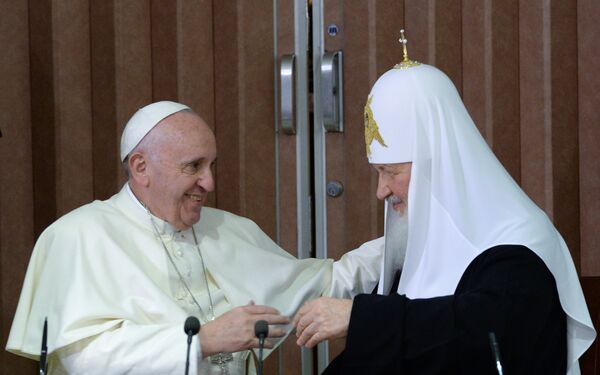 "We deplore the hostility in Ukraine that has already caused many victims, inflicted innumerable wounds on peaceful inhabitants and thrown society into a deep economic and humanitarian crisis. We invite all the parts involved in the conflict to show prudence, to show social solidarity and show action aimed at constructing peace."

With the Syrian conflict threatening to push the world to the brink of war, the document calls on all Christians to pray for peace.

"We exhort all Christians and all believers of God to pray fervently to the providential Creator of the world to protect His creation from destruction and not permit a new world war."

Friday’s meeting marks the first time that leaders of the Roman Catholic and Russian Orthodox churches have met in nearly 1,000 years. The two broke apart over theological differences in 1054, officially separating in 1438.

000000
Popular comments
"We exhort all Christians and all believers of God to pray fervently to the providential Creator of the world to protect His creation from destruction and not permit a new world war."….then they must be prepared to fulfill their part and open up to embracing Truth that has been hidden and is and will continue to surface.. move with love for all humanity….. plug in and commit to moving with Truth in your hearts
Ayelyah
13 February 2016, 03:00 GMT
000000
now that was a period of sanctions!
michael
13 February 2016, 06:55 GMT
000000
Newsfeed
0
New firstOld first
loader
LIVE
Заголовок открываемого материала
Access to the chat has been blocked for violating the rules . You will be able to participate again through:∞. If you do not agree with the blocking, please use the feedback form
The discussion is closed. You can participate in the discussion within 24 hours after the publication of the article.
To participate in the discussion
log in or register
loader
Chats
Заголовок открываемого материала
Worldwide
InternationalEnglishEnglishMundoEspañolSpanish
Europe
DeutschlandDeutschGermanFranceFrançaisFrenchΕλλάδαΕλληνικάGreekItaliaItalianoItalianČeská republikaČeštinaCzechPolskaPolskiPolishСрбиjаСрпскиSerbianLatvijaLatviešuLatvianLietuvaLietuviųLithuanianMoldovaMoldoveneascăMoldavianБеларусьБеларускiBelarusian
Transcaucasia
ԱրմենիաՀայերենArmenianАҧсныАҧсышәалаAbkhazХуссар ИрыстонИронауОssetianსაქართველოქართულიGeorgianAzərbaycanАzərbaycancaAzerbaijani
Middle East
Sputnik عربيArabicArabicTürkiyeTürkçeTurkishSputnik ایرانPersianPersianSputnik افغانستانDariDari
Central Asia
ҚазақстанҚазақ тіліKazakhКыргызстанКыргызчаKyrgyzOʻzbekistonЎзбекчаUzbekТоҷикистонТоҷикӣTajik
East & Southeast Asia
Việt NamTiếng ViệtVietnamese日本日本語Japanese中国中文Chinese
South America
BrasilPortuguêsPortuguese
NewsfeedBreaking
16:19 GMTAfter Months of Priests' Protest at Pilgrimage Sites, Uttarakhand Gov't Dissolves Shrine Board
15:35 GMTSouth Korea Rejects Claim It Is Helping Taiwan With 'Indigenous Defence Submarine Programme'
15:27 GMTEpstein Competed With Trump to Seduce Young Women, Ex-POTUS' Accuser Claims
15:25 GMTGerman Court Sentences Iraqi to Life in World's First Case of Genocide Against Yazidis
15:01 GMTFBI Investigates Whether Long Island Blast Could be Linked to Terrorism
15:00 GMTRussian Startup Offers $200,000 for Right to Use Applicant's Face on Its Robot 'Forever'
14:59 GMTUK Spy Chief Urges Intel Services to 'Tap Into Global Tech' to Address 'Changing Nature of Threats'
14:52 GMTAlexander Lukashenko Says Poland-Belarus Refugee Crisis May be Resolved by Year-End
14:34 GMTSudan Denies Reports of Resumed Clashes at Border With Ethiopia
14:29 GMTFrance Needs Numerous Nuclear Reactors to Completely Re-Industrialize, Economy Minister Says
14:24 GMTIraqi Political Groups Reportedly Seek to Forge Bloc in Push to Drive US Forces From Country
14:22 GMTStoltenberg & Latvian Foreign Minister Deliver Remarks at NATO Foreign Ministers Meeting in Riga
14:20 GMTUS Revokes Terrorist Designation for Colombia's FARC
14:03 GMTWEF Says Will Continue to Prepare for Annual Meeting in Davos Despite Omicron Concerns
13:59 GMTIndian Opposition Demands That Bihar Chief Resign After Liquor Bottles Are Found in State Assembly
13:49 GMTTrump, 6 January Panel to Face Off in Federal Appeals Court Over White House Docs
13:37 GMTMinsk Ready to Deploy Russian Nuclear Weapons if NATO Systems Appear in Poland, Lukashenko Says
13:00 GMTPutin Undecided if He Will Run for President Again
12:49 GMTSudanese Police Use Tear Gas Against Demonstrators in Country's Capital - Photo, Video
12:39 GMTPETA Launches Fake Store Touting 'Human Leather Goods,' Slams Urban Outfitters