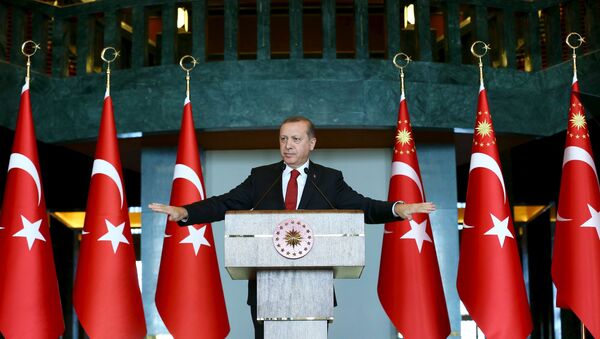 The Turkish President has re-established close ties with Islamists and Turkish ultranationalists, at the same time providing the country's intelligence agency with sweeping powers, US author Jonathan Marshall writes.

"Turkey's embattled President Recep Tayyip Erdogan is resurrecting the 'deep state' alliance of secret intelligence operatives and extreme rightists that he so notably challenged just a few years ago while putting hundreds of military officers and other opponents on trial for conspiring against Turkish democracy. In a remarkable about-face, Erdogan is now emulating the ruthless tactics of previous authoritarian rulers at the expense of Turkey's evolution as a liberal state," Marshall writes in his article for Consortiumnews.com.

Powder Keg: Turkey Plans Joint War Games With Saudi Arabia
Erdogan and his "moderate Islamic" Justice and Development Party (AKP) successfully cultivated a "democratic image." But since his power grab, Recep Erdogan has cracked down on military officers, academics, journalists, businessmen and other opponents of the AKP.

"The intimidation and the number of arrests have steadily risen in the last 10 years," Marshall continues citing Der Spiegel. The Turkish leadership used a series of show trials to get rid of their former political allies, including the exiled Muslim cleric Fethullah Gulen, and opposition.

At the same time, Erdogan has dramatically increased the budget of the country's intelligence agency:

The US author cited Turkish expert Pinar Tremblay who dubbed MIT as "a prominent player in the decision-making process for Turkish politics."

Syria Talks: How Russo-Syrian Advance May Change Geneva Agenda
Furthermore, Erdogan is seeking support from the National Action Party (MHP), and its paramilitary wing — the Grey Wolves. The neo-fascist group has been famous for its assaults against Turkish Kurds and left-wing activists and political parties.

Evidence is emerging that Ankara is using ultranationalists along with Turkish Islamists in its covert war in Syria.

"Turkish involvement in the Syrian war has been heavily dominated by Islamist fighters, but the conflict has also drawn in an unlikely quarter — Turkish nationalists. The far-right Nationalist Action Party (MHP) and its youth branch, the Idealist Hearths, have recently come into the spotlight with high-profile losses on the Syrian battlefield," Fehim Tastekin noted in his February article for Al-Monitor's Turkey Pulse. 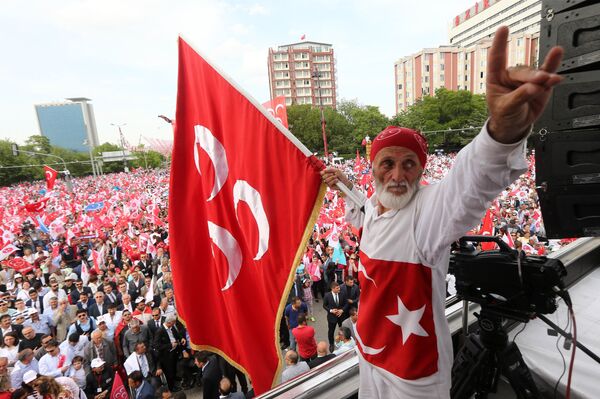 Tastekin called attention to the fact that unlike Turkish Islamists who "were regulars" in armed conflicts in Afghanistan, Bosnia, Kosovo and Chechnya, the ultranationalists "had only taken feeble interest" in "jihadi" wars.

Syrian Kurds Begin Major Operation Against Jihadists in Key Town of Azaz
Now, however, their military activity has caught a second wind in northern Syria under the pretext of protecting the Syrian Turkmen minority against Syrian Kurds and Russians.

It is no secret that it was Alparslan Celik, the Turkish ultranationalist, who shot dead the Russian pilot who ejected from the Su-24 bomber downed by the Turkish F-16 over Syria on November 24, 2015.

Citing Kemal Can, an expert on the Turkish ultranationalist movement, Tastekin underscored that Grey Wolves are engaged in supporting Turkmen not for "ideological reasons" but because of state recruitment.

The Turkish journalist expressed his deep concerns regarding the possibility of a close alliance between Turkish ultranationalists and radical Islamists, including Daesh and al-Qaeda's branch al-Nusra Front.

Turkey's leadership has created monsters it is doomed to deal with. Erdogan's "deep state" has proven efficient as a tool of ruthless intimidation. At the same time, Ankara is stripping bare the country's democracy and threatening fundamental rights and freedoms, according to Marshall.

"It [deep state] represents a direct threat not only to Turkish democracy, but to Turkey's neighbors and NATO allies, who will bear the consequences of Erdogan's ever-more risky, erratic and self-serving policies," US author concludes.

000000
Popular comments
National patriotism is a foolish ideology. It plays purely on the ego and false loyalties. I will never be patriotic or loyal to a nation, I am loyal to good men and women no matter where they come from.
Mitach2002
12 February 2016, 15:09 GMT
000000
Newsfeed
0
New firstOld first
loader
LIVE
Заголовок открываемого материала
Access to the chat has been blocked for violating the rules . You will be able to participate again through:∞. If you do not agree with the blocking, please use the feedback form
The discussion is closed. You can participate in the discussion within 24 hours after the publication of the article.
To participate in the discussion
log in or register
loader
Chats
Заголовок открываемого материала
Worldwide
InternationalEnglishEnglishMundoEspañolSpanish
Europe
DeutschlandDeutschGermanFranceFrançaisFrenchΕλλάδαΕλληνικάGreekItaliaItalianoItalianČeská republikaČeštinaCzechPolskaPolskiPolishСрбиjаСрпскиSerbianLatvijaLatviešuLatvianLietuvaLietuviųLithuanianMoldovaMoldoveneascăMoldavianБеларусьБеларускiBelarusian
Transcaucasia
ԱրմենիաՀայերենArmenianАҧсныАҧсышәалаAbkhazХуссар ИрыстонИронауОssetianსაქართველოქართულიGeorgianAzərbaycanАzərbaycancaAzerbaijani
Middle East
Sputnik عربيArabicArabicTürkiyeTürkçeTurkishSputnik ایرانPersianPersianSputnik افغانستانDariDari
Central Asia
ҚазақстанҚазақ тіліKazakhКыргызстанКыргызчаKyrgyzOʻzbekistonЎзбекчаUzbekТоҷикистонТоҷикӣTajik
East & Southeast Asia
Việt NamTiếng ViệtVietnamese日本日本語Japanese中国中文Chinese
South America
BrasilPortuguêsPortuguese
NewsfeedBreaking
08:29 GMTMexican Army Detains 'Priority Target' in 2019 Massacre of Mormon Family, State Attorney Says
08:10 GMTGun Involved in Killing Halyna Hutchins Was Reportedly Used by Crew Off-Set for Fun
07:34 GMTTop UK Army Bosses Accused of 'Covering Up' Killing of Kenyan Woman by British Soldier
06:11 GMTAs Israel Preps to Vaccinate Kids Against COVID-19, Some Say They Will Be Against 'Coercion'
06:06 GMT‘Inexperienced, Green’ Armourer on Alec Baldwin Film Set Described as ‘Careless With Guns’ Before
06:03 GMTHow Long Can Chelsea Survive Without a Striker?
05:22 GMT6.2 Magnitude Earthquake Shakes Taiwan - EMSC
05:14 GMTUS Still Ready For Dialogue With North Korea Without Preconditions, Special Envoy Says
04:31 GMTFacebook Struggled to Curb Violent, Divisive Content in India, Internal Documents Show
03:23 GMTWho’s the Best Football Player in the World?
02:45 GMTAmerican Film Institute Establishes Scholarship in Memory of Halyna Hutchins
02:30 GMTMore Than 10,000 Sequoias Must Be Removed After California Wildfires, National Parks Reveal
01:00 GMTWho has the Edge Between Manchester United and Liverpool?
00:12 GMTBritish Military Brings Over 100 People Who Had Left Afghanistan to UK - Defense Ministry
YesterdayUS Seeking Clarity Over Turkey’s Intention to Declare US Ambassador Persona Non Grata
YesterdayUS Authorities Getting Veterans Involved in Resettlement on Afghan Refugees - Reports
YesterdayBiden’s Popularity Drops More Than That of Any Other US Leader Since End of WWII - Poll
Yesterday‘Rust’ Director ‘Gutted’ by Fatal Shooting of Halyna Hutchins on Set
YesterdayPotty-Mouthed PM: Broadcaster Blocks Boris Johnson's Remarks on Gay Men, Muslim Women
YesterdayHome Run! The Astros Win a Ticket to the World Series Amid Sign-Stealing Scandal