Robotroops: Russia to Roll Out Robot Fighting Force by 2025 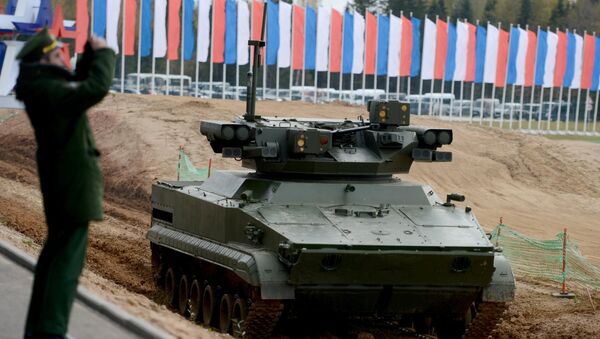 A new generation of robots is due to be put into service by the Russian Armed Forces in the coming years, media reports said.

"Next generation robotic systems are already being tested within the framework of development work, and several such systems will be put into service with the Russian Army in the forthcoming years," Popov said.

According to him, "the army's robot automation aims to achieve a new quality of warfare, which in turn will help improve the effectiveness of combat missions and reduce losses."

"Particular attention will be paid to the rational combination of the capacities of soldiers and military hardware," he said, adding that the robot program is set to be implemented by 2025.

Earlier, Popov said that the Russian Defense Ministry is currently using robots for a variety of tasks, from looking for illegal armed groups to mine sweeping.

Russia’s Future Weapons: Avatars, Robots and Mind-Controlled Quadcopters
He added that "since 2011, the number of unmanned aerial vehicles deployed by the Russian Defense Ministry has risen ninefold; the use of ground robots has tripled and the use of underwater robots has increased four times."

The system is on display at a robotic technology exhibition which opened at Patriot Park outside Moscow on February 10. The exhibition is being held within the framework of Robot Automation, a military technology conference being hosted by the Russian Armed Forces.