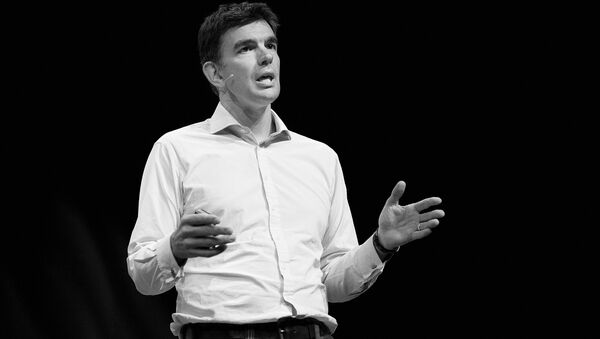 © Flickr / Jarle Naustvik
Subscribe
Lawmakers in the UK House of Commons have lambasted Matt Brittin, President of Google Europe, over the company's tax arrangements, which allowed it to pay only US$188 million over ten years, and his inability to recall how much he is paid each year.

Brittin was called before the House of Commons Public Accounts Committee Thursday after an outcry when it was announced that — following a six-year investigation — it was to pay back taxes for a ten-year period from 2005 of just US$188 million, which amounts to three percent tax. The company — as well as the UK tax agency HMRC — were hit with severe criticism over the so-called "sweetheart deal."

We are discussing tax with @google, including the amount that they pay in other countries. #googletax pic.twitter.com/OESWEpzIZe

At the opening of the meeting, Brittin admitted that in the last 18 months UK revenues were US$1.71 billion and that ten percent of its global sales were generated in Britain, but that it showed a profit of only US$153 million.

.@Meg_HillierMP to Mr Brittin: You're a British citizen, but you live on a different planet from UK taxpayers. pic.twitter.com/C71iwsblkg

At the center of the argument is that Google makes use of the — perfectly legal —  'Double Irish' arrangement that allows the company to use a system of payments between different company entities in different countries to lower its corporation tax liability.

Lin Homer: @google had around 20 meetings with Government in the last couple of years, @HMRCgovuk was not present at any of them. #googletax

Specifically, all Google transactions in the UK are invoiced from Google Ireland, where the tax regime is lower, so that — after charges between Google's UK and Ireland operations are taken into account, Google corporation tax liability in the UK is lowered.

However, Brittin was derided in a tense opening when asked by committee chair Med Hillier how much he earned. He twice evaded the question before saying: "I don't have the figure, but I will quite happily provide it," to which Hillier responded:

"You don't know what you get paid Mr Brittin?"

At this point laughter broke out among the committee members and the audience as Brittin stumbled to say:

"It's a salary… er… I don't have the figure, but I will provide it privately if it's relevant to the committee to understand my salary."

"Out there, taxpayers — our constituents — are very angry. They live in a different world — clearly — to the world you live in, if you can't even tell us what you're actually paid. I wonder if you've got tin ear, that you can't hear this."

.@Meg_HillierMP: Frankly you're taxing my patience and the patience of the hard-working British taxpayer. #googletax pic.twitter.com/ShudZRxnFL

Brittin admitted using a tax system that allows for taxation on profits on "economic activity" in one country and not in proportion to sales, that allows it to reduce its corporation tax bill in the UK.

He said: "We're paying tax at 20 percent [UK standard rate] on the activities in the UK." However, that payment is on a reduced amount because of the Double Irish arrangement.

"In Ireland, we have well over 5, 000 people working, we have a data center and we are building another data center. People in Ireland serve customers and businesses in the UK, across Europe, the Middle East and Africa," he said.

Matt Brittin, @google: A lower tax rate was one of the reasons for setting up in Ireland. #googletax pic.twitter.com/ZPkKiO5oEw

Writing in the Daily Telegraph Thursday, Brittin said: "As much as I would like Google to have been created here in Britain, the fact is that Google is a US company. We employ around 20,000 software engineers in the US, compared with around 1,000 in the UK.

"The US is where most of our products were designed and created, where most of our R&D takes place, and where we bear the most investment risk. Some here in Britain have argued we should be paying much more tax given the sales we make in the UK. But that is just not how the tax system works," he wrote.