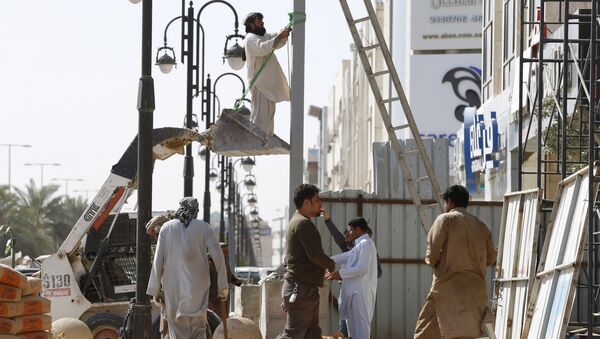 Certain Saudi Arabian construction companies are apparently unable to pay their workers on time as tumbling oil prices have prompted the government to cut spending in order to deal with a mounting budget deficit.

"The pace of execution on some of the existing projects has slowed down, so a project that would take six months to complete may now see an extended execution time line. Moreover, government payments have slowed down. As a result, contractors which normally rely on short-term funding for projects are feeling an impact on their working capital, so their ability to repay debt is not as strong as it was before," Murad Ansari, an analyst at EFG-Hermes in Saudi Arabia, told Reuters.

The Saudi Ministry of Labor has also issued a statement this week, claiming that the employees at some unnamed "major institution" complained that they haven’t been paid in months. The ministry pointed out that these claims have already been verified and appropriate measures have been enacted.

Political Bluff? Why Saudi Arabia Will Not Invade Syria
According to Reuters, the company in question is a construction enterprise, and that several other construction companies are currently dealing with similar issues.

As falling oil prices and the ongoing campaign against the Houthi rebels take their toll on the Saudi economy, the kingdom’s leadership seeks to reduce its dependence on oil and shrink the public sector where two thirds of local workers currently work, in a bid to "switch from simple quantitative growth based on commodity exports to qualitative growth that is evenly distributed," as Saudi Arabian Health Minister Khalid al-Falih put it.