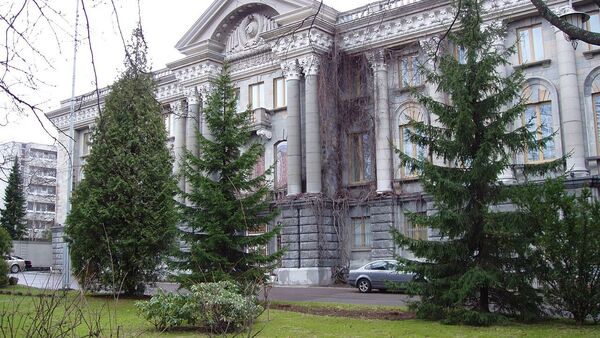 © Photo : Wikipedia/TTKK
Subscribe
Russian Ambassador to Finland Alexander Rumyantsev said that year 2015 was not very successful for the Russian-Finnish trade.

"We observe the objective interest of the economic operators on both sides of the border in the reconstruction and development of the relations. Although it won't be easy to achieve the 'pre-crisis' level of turnover rates in the near future, first of all because of low oil prices, there are prerequisites for the fundamental changes in the structure of mutual trade," Rumyantsev told RIA Novosti.

According to Rumyantsev, year 2015 was not very successful for the Russian-Finnish trade.

"According to Russian customs statistics, in January-November, the volume of bilateral trade amounted to $9 billion, which is almost 40 percent less than in the same period a year earlier," he added.

Russia-Finland Trade Turnover Down Almost 40% in 2015
The diplomat believes, however, that the further decline in trade turnover between Russia and Finland is unlikely to continue.

For the past two decades relations between Russia and Finland have been an example of mutual and neighborly cooperation in trade, economy and investment.

However, relations between Russia and the West, including NATO, which Finland is a member of, deteriorated in 2014 over the Ukrainian crisis.

The European Union, the United States and a number of their allies have imposed several rounds of sanctions against Russia, accusing the Kremlin of interfering in the Ukrainian conflict by supporting independence militias in the country's southeast. Moscow has repeatedly denied the accusations.

In response to the Western sanctions, Russia responded with an embargo on a wide range of food product imports from countries that imposed restrictions on Russia.