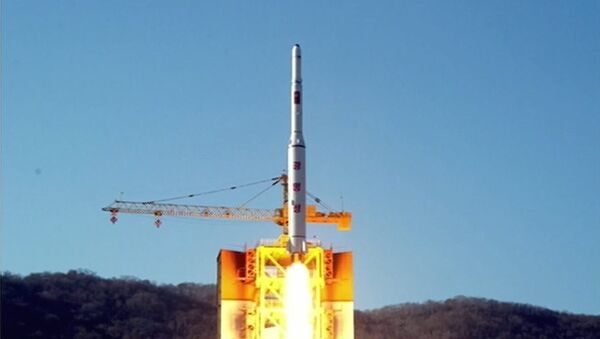 © AFP 2021 / YONHAP / NORTH KOREAN TV
Subscribe
Only a political, and in no way a military, solution can resolve the North Korean nuclear issue, Russian Ambassador to Japan Yevgeny Afanasyev said.

US Vows to Defend S Korea, Japan in Wake of Pyongyang's Rocket Launch
MOSCOW (Sputnik) – Over the weekend, North Korea fired a long-range rocket to allegedly place a satellite into orbit, with the rocket being nearly identical to those used by North Korea to launch nuclear weapons. Meanwhile, there is a UN Security Council resolution that bans Pyongyang from firing rockets that could be used as ballistic missiles to carry nuclear warheads. The United States, Japan and South Korea strongly condemned the launch.

"We call for a deescalation and a political and diplomatic settlement of this problem, as well as other problems on the Korean peninsula…. Such steps threaten the security of Russia and Japan, and this is unacceptable," Afanasyev told RIA Novosti.

Earlier in the day, the Japanese government announced the introduction of tougher sanctions against North Korea, including a ban on the admission of foreign vessels to Japanese ports if they have visited North Korea, in response to Pyongyang's nuclear activity.

"The development of North Korea's nuclear program causes us deep concern. By pursuing the development of such programs and by carrying out a rocket launch, North Korea has shown its disregard for the UN Security Council resolutions and international law," the Russian ambassador said,

Afanasyev underscored that many other countries around the world are very likely to support the idea of North Korea being free from any nuclear weapons.

In 2003, North Korea walked out of the international Nuclear Non-Proliferation Treaty (NPT), a deal that was intended to prevent the spread of nuclear weapons manufacturing and possible use worldwide.

Two years later, North Korea declared itself a nuclear power. So far, it has conducted four underground nuclear weapon tests — in 2006, 2009, 2013 and 2016, raising concerns among both neighboring states and the international community, and prompting the UN Security Council to consider sanctions against Pyongyang.