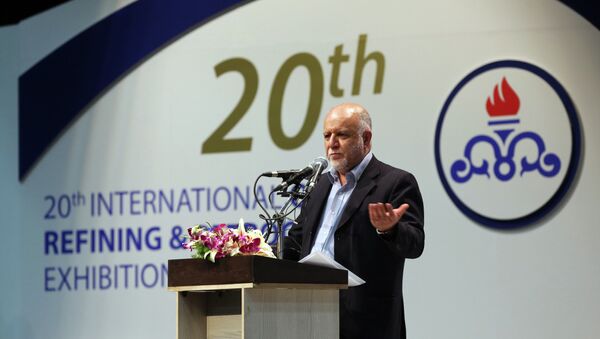 © AFP 2021 / ATTA KENARE
Subscribe
Iran is ready to discuss the situation on the international oil markets with Saudi Arabia despite the tensions between the two countries, Iranian Oil Minister Bijan Zanganeh said.

Iran's Return to Oil Market Leads to Further Increase in OPEC Output
MOSCOW (Sputnik) — Tensions escalated between Saudi Arabia and Iran after the Sunni kingdom executed a prominent Shiite cleric in January. Riyadh closed its embassy in Tehran following attacks on its diplomatic missions in the country by Iranians protesting against the execution.

"We support any form of dialogue and cooperation with OPEC member states, including Saudi Arabia," the Iranian Press TV channel quoted Zanganeh as saying.

According to the minister, some Gulf countries have expressed a desire for economic gain by maintaining oil price declines, however "what they want to achieve is not for the sake of economic benefits."

"If there was a strong political will, the price of oil would have been balanced in just a week," Zanganeh said, as quoted by the media.

Since the collapse in oil prices in the first half of January, officials from OPEC member states and non-OPEC countries have been considering holding a meeting to address the declining oil prices, which have caused significant financial problems for some states. The decline in oil prices have been linked with overproduction on crude.

According to a report by the International Energy Agency (IEA), Iran, one of OPEC's leading producers, increased its daily output by 80,000 barrels in January, while the top OPEC producer, Saudi Arabia, posted a 70,000-increase in output during the first month of 2016.