US Senator's Statement on Daesh Threat Intensifies War on Encryption 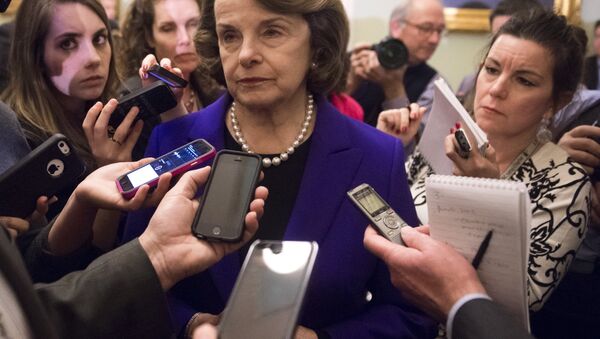 The chairman of the US Select Intelligence Committee has claimed that Internet and encrypted emails is all Daesh, also known as Islamic State, needs to carry out terrorist attacks in the West.

Senator Dianne Feinstein, a California Democrat, was speaking at a Senate hearing on national security risks on Tuesday, specifically referring to the threat posed by Daesh.

"How do we degrade [Daesh] and destroy it if all they need to carry out an attack in the West is an Internet connection and an encrypted message application?" she said in her speech.

Feinstein's remarks are just the latest in a long series of attacks on encryption, in the US and elsewhere.

.@WhiteHouse cybersecurity action plan is an important step to combat one of the most urgent threats of our time. https://t.co/xBmKslV1Ho

While encrypted mail technology has been around for decades, it really began spreading after Edward Snowden — an encryption user himself — in 2013, revealed a global surveillance program carried out by the US, UK and other English-speaking.

More and more people are adopting encryption strategies in order to "go dark" — with the US government becoming increasingly worried about its ability to intercept data.

The rise of tech-savvy terrorist group Daesh and last year's attacks in Paris and San Bernardino have only fanned the flames of governmental anti-encryption hostility.

Recent plans by Google and Apple to add default encryption to mobile phone software iOS and Android were harshly criticized by the FBI — a fact that could have played a role in Google's subsequent backdown.

Large tech companies are also being constantly, if obliquely, badgered into creating so-called "backdoors" — exploits that would allow authorities to break encryption.

And it is not only the US that is waging this "war on crypto." Equally, the UK is fretting about how encryption would make it harder to enforce surveillance.

In 2015, the British government even toyed with the idea of banning encrypted message applications like Whatsapp and iMessage altogether, although the plan seems to have been abandoned since.

Nonetheless, according to Home Secretary Theresa May, the new draft Investigatory Powers Bill, dubbed the Snoopers' Charter, could enable the UK to issue warrants asking companies to decode encryptions if necessary.

Since the most secure types of encryption — so called "end-to-end encryption" — are devised to be unbreakable even by their providers, the government could request companies to adopt less-secure encryption technology.

In a statement presented to the UK parliament in December, Apple itself came out in opposition to the bill.

"We believe it would be wrong to weaken security for hundreds of millions of law-abiding customers so that it will also be weaker for the very few who pose a threat," Apple said.

The war on encryption, though, is most likely set to intensify.

France, which has been tightening its security standard following last November's Paris attacks, is trying to introduce similar encryption-weakening measures too, while China has already passed a bill that would require companies to break encryption if presented with a warrant.