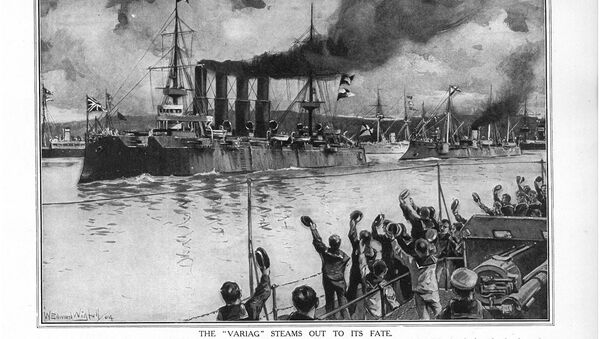 Nikolai Gorshkov
All materials
The people of South Ayrshire have been celebrating the courage of Russian sailors during the Russian-Japanese war of 1904-1905. However incredible it may sound, an echo of that war in the Far East traveled across the globe and reached the village of Lendalfoot back in 1920.

It was the legendary Russian cruiser Varyag that refused to surrender to the Japanese Navy in February 1904, picked up a fight with 14 enemy warships and was scuttled by the crew to avoid capture. Sold for scrap, it ended up in the Firth of Clyde in view of Lendalfoot. 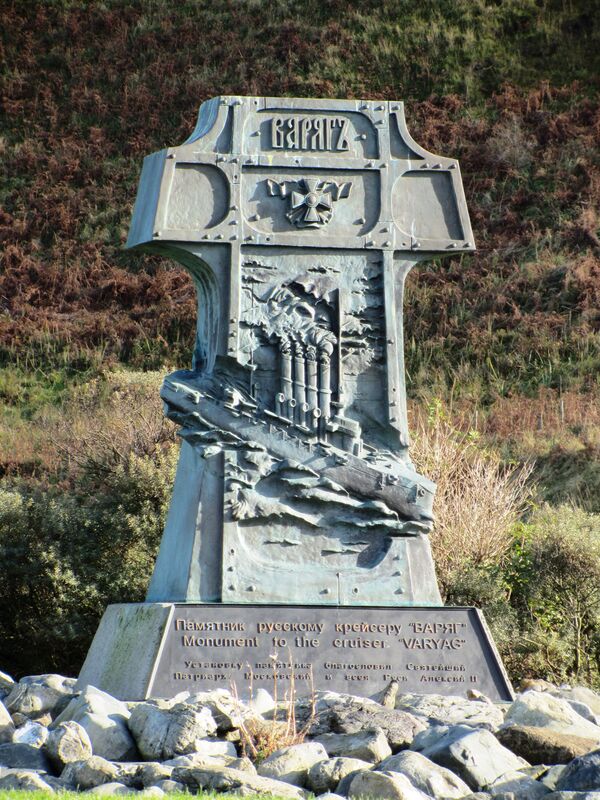 A monument to the Russian sailors was erected in the village in 2007, and the 9th of February, the day of the 1904 battle, is marked as a Day of Remembrance of the Russian sailors.
© Photo : Consulate General of Russia in Edinburgh

Today's wreath laying ceremony was attended by the Provost of South Ayrshire, Councilor Helen Moonie, and Consul General of the Russian Federation in Scotland, Andrey Pritsepov.

"We've started a good tradition — to gather here on the 9th of February to pay tribute to the unflinching spirit and valor of Russian sailors, who courageously fought on the legendary cruiser, the Varyag," Mr Pritsepov said.

The Varyag was not on a combat but rather diplomatic mission. Together with the Koriets gunboat she was to offer support to the Russian Embassy in nearby Seoul. Its orders were to establish friendly relations with other foreign ships in the harbor and not to provoke the Japanese.

However, the Japanese who had planned to land their "boots on the ground" in the Chee Mule Po harbor (Inchon) because of its proximity to the Korean capital were apprehensive of the Russian ships, believing they could disrupt the landings.

The Japanese commander Admiral Urio issued an ultimatum to the Russian Commander Rudnev to leave the harbor at noon on 08 February 1904 or face Japanese attack. The Japanese could not attack the Russian ships in the harbor as long as there were warships of the non-combatant nations there: HMS Talbot, the French cruiser Pascal, as well as Italian and American warships. The Japanese insisted that those ships clear the harbor to make way for the battle with the Russians.

The western commanders were minded to oblige, but that would have meant that the Russian ships would be locked in the narrow harbor with limited freedom of maneuver. Russian officers unanimously decided to fight their way out of the harbor and joint the main Russian fleet at Port Arthur. The odds were hugely against the Russians: 6 Japanese cruisers and 8 destroyers to one Russian cruiser and a gunboat. The Russian crews knew they stood very little chance and unanimously decided to blow the ships up if they lost the battle.

All Hands to Their Stations

Shortly before the deadline, the two Russian warships raised the flags and steamed past the "neutrals" towards their fate. An entry in the Varyag logbook says: "The crews on the English and Italian warships greeted us with ‘hurrahs' and the Italians played our national anthem."

As strange as it may seem, the Varyag had a better chance of cutting through the Japanese blockade on its own. It was the newest warship among all those who took part in the battle on both sides, and it had a speed advantage over the Japanese boats. But the Koriets was much older and slowed the pace of the attempted escape significantly. After the war, critics said that Varyag should not have tied itself to the gunboat — what they failed to understand was the solidarity of the sailors and officers of the two ships in trouble.

The Varyag — which was first through the narrow passage — took a heavy pounding from several Japanese ships and started listing. Many Russian sailors were killed and wounded. Hoping to quickly repair the damage, the captain steered the ship back to its berthing but the chances of an escape had all but vanished.  The initial plan to blow up the Varyag was abandoned for fears that the explosion of the unused ammunition could hit the non-combatant western ships nearby. The ship was scuttled. The smaller Koriets was blown up.

The Americans turned down the Russian request to help evacuate the casualties, but the British, the French and the Italians agreed to take the wounded and survivors onboard their ships. Eventually, all surviving sailors from both Russian ships were transported back to Russia where they were greeted as heroes. A rousing patriotic song was written to celebrate their feat, and it became the rallying cry for generations of Russian sailors.

As for the Varyag, its story did not end there. The Japanese salvaged the ship in 1905 and brought it back into service under the name of Soya. She was mainly used for training and the first thing the Japanese cadets were taught was how to defend the honor of one's country. In recognition of the Russian valor they even kept the old name of the cruiser next to the new one.

During the Great War the former enemies Russia and Japan became allies against Germany, and in 1916 Russia bought the Soya for four million yen. The cruiser got back its original name and sailed to Liverpool for an overhaul. But in 1917 the Russian revolution struck and the new Bolshevik government refused to pay the Tsar's bills, declaring all imperial agreements null and void.

After the end of the Great War the British sold the Varyag to Germany for scrap. While being towed to its final destination she ran aground in view of Lendalfoot and sank again.

In 2006, the people of Lendalfoot put up a plaque to commemorate the Russian sailors, and a year later a 10-foot bronze cross was erected in memory of their courageous feat.

Not everyone in Russia back in 1904 approved of the Varyag's daring but doomed dash to freedom. It was indeed futile to try and fight its way past 14 enemy warships. But what Varyag showed to the world was the exemplary courage and patriotism of the Russian sailor. Even the adversary — the Japanese — recognized the valor of the Varyag crew by decorating its captain.

Nowadays, another Russian warship is carrying the legendary and honorable name.

The flagship of the Russian Pacific fleet, the missile cruiser Varyag is patrolling the Mediterranean off the Syrian coast, protecting the Russian air base in Latakia with its powerful air defence systems and warplanes, fighting against the terrorist group Daesh, also known as Islamic State.