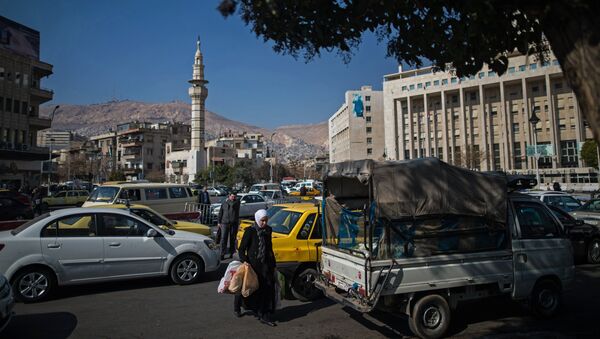 Russia's role in the settlement of the Syrian crisis and assistance in the fight against terrorism may soon result in economic benefits for Russian companies, Russian Ambassador to Syria Alexander Kinshchak said.

DAMASCUS (Sputnik) — "We believe that Russia's political role, our military efforts in the near term will be turned into substantial economic dividends. Those companies that will come here before others will have a better start," Kinshchak told RIA Novosti in an interview.

Assad: Syrians Rely on Russia in Rebuilding the Country
According to the ambassador, there is already a Russian company which has projects in Syria. The company is engaged in the construction of a gas processing plant, irrigation facilities and mills.

Apart from fighting the rebels in the ongoing conflict, government forces have had to counter extremist groups as well, including Daesh, which is outlawed in Russia and many other countries. Since September 30, Moscow has been conducting airstrikes on Daesh targets in Syria following a request from Assad.

Russia has been supporting Assad as the legitimate Syrian authority, and is contributing to finding a political solution to the crisis in the conflict-hit country, including mediating intra-Syria talks and helping to organize international meetings on the issue.

Moscow has also been providing the beleaguered Syrian civilian population with humanitarian aid.