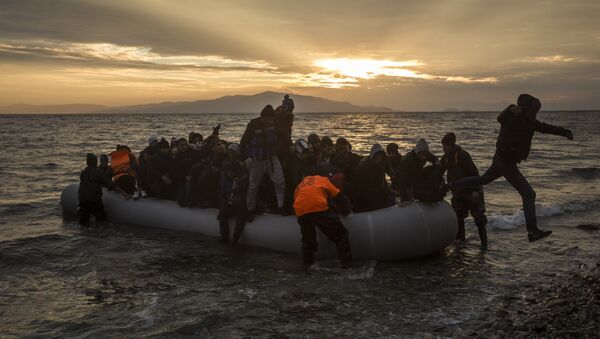 Over 76,000 migrants and refugees arrived in Greece and Italy by sea between January 1 and February 7, the International Organization for Migration's (IOM) latest figures, published Tuesday, show.

MOSCOW (Sputnik) — The IOM data revealed that Greece and Italy registered 70,365 and 5,898 migrant maritime arrivals, respectively, between January 1 and February 7. During the first two months of 2015, Greece registered only 3,952 migrant arrivals by sea, while Italy received 7,882 migrants via the Mediterranean route.

Since January 1, 2015, the total number of arrivals to the Greek islands has reached 924,015, while the figure is expected to surpass one million next month, according to IOM.

Erdogan Blackmailed EU for €30 Bln Over Migrant Crisis Plan
IOM added that the death toll in the Mediterranean Sea had reached 409 since January 1, 2016, against 428 deaths for the period between January 1 and February 28 in 2015.

According to IOM, over a million migrants arrived in Europe via the Mediterranean in 2015, while over 3,700 died attempting to make it across the sea route that year.