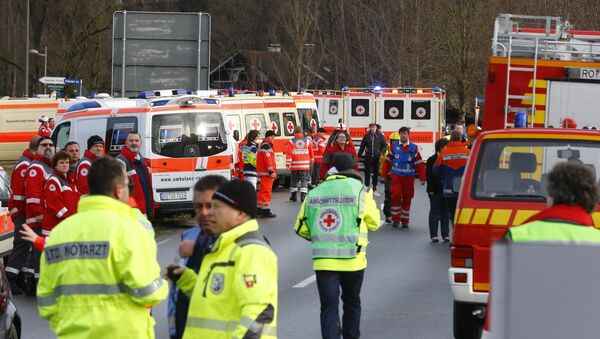 The operation to clear the rail track from the debris of two passenger trains that collided head-on in southern Germany will last at least several days, a German official said Tuesday.

One of the German Trains ‘Completely Torn Apart' After Deadly Crash
MOSCOW (Sputnik) — The Meridian trains collided on a single-track section of the rail line near the town of Bad Aibling between Holzkirchen and Rosenheim in the state of Bavaria.

Nine people have been confirmed dead and more than 150 were injured, while two passengers are still missing, according to police. The affected section of the rail line has been closed.

"I do not think it will necessarily be closed for weeks, but it [the clear-up operation] will take several days," the official told journalists at a press conference in Bad Aibling.

Two heavy-duty cranes will be used to lift some of the train wreckage. At least one of the trains derailed and several carriages were seen overturned close to the track, according to local media reports. Hundreds of rescuers are taking part in the search-and-rescue effort, including emergency workers from neighboring Austria.