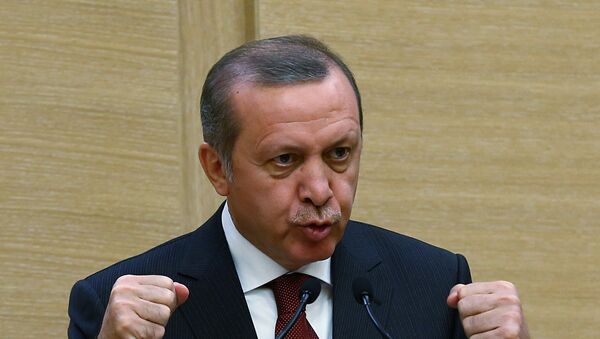 Turkey Wants Additional $2Bln From EU for Migrant Crisis Management
The talks took place in Antalya on November 14, 2015. The confidential document has been published by Greek website Euro2Day.

According to it, Erdogan threatened to send migrants to Europe.

By that time, the EU and Turkey had agreed a plan on providing €3 billion to Ankara in exchange for assistance in resolving the migrant issue.

However, Erdogan threatened that he would take measures if the EU delayed Turkey’s admission to the bloc. Particularly, he said Turkey would put refugees on buses to Europe and the consequences for Europe will be "more than a dead boy" on the Turkish shores.

Erdogan refused to receive the €3 billion in two years, which he had earlier agreed to. He said the proposal should be at least €3 billion a year. Otherwise, no deal concerning the refugees would work, according to the document.

Turkey Has Means to Take Migrant Crisis Under Control - Czech PM
It also read that the EU Council of Ministers delayed its progress report on Turkey’s accession to the EU with the purpose to help the Justice and Development Party (AKP) to win the elections.

Erdogan was arrogant and hasty and the negotiations ended with no result, the document read. Demanding more money, he claimed that during the financial crisis Greece received €400 billion from Brussels.

"Erdogan asks rhetorically: 'So how will you deal with refugees if you don’t get a deal? Kill the refugees?'," according to the document.

However, this incident exposing Turkey’s position has not been reported to the EU authorities and country members of the bloc, the article read.

000000
Popular comments
I can say only this much, it is the age of the Internet and fast information exchange. If these people think there will be no consequences for hiding this kind of dialogue they are fools. Heads will roll because of the wars in the ME and the migrant crisis. I do not think Abu Babushka and Erdogan will last long. And many EU officials will roll with them.
vendor
9 February 2016, 12:32 GMT4
000000
It's a bit, how do you say, out of order to issue an ultimatum to gain admission to the EU. Does not bode well for future cooperation.