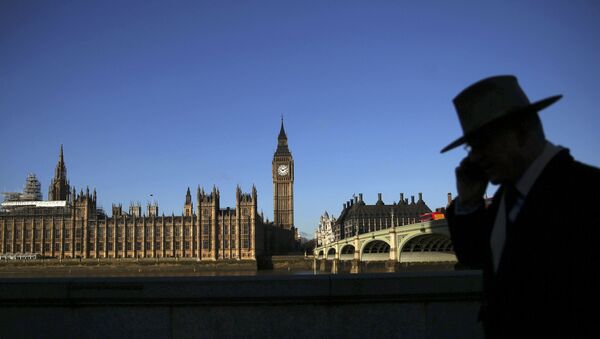 © REUTERS / Neil Hall
Subscribe
The UK Parliament's Intelligence and Security Committee has criticised a proposed surveillance law that experts think would disregard privacy and open the door to mass surveillance.

In a report released Tuesday, the parliamentary body pointed out how the draft Investigatory Powers Bill, dubbed the Snoopers' Charter and sponsored by Theresa May's Home Office, would fail to protect UK citizens' privacy.

"Given the background to the draft Bill and the public concern over the allegations made by Edward Snowden in 2013, it is surprising that the protection of people's privacy — which is enshrined in other legislation — does not feature more prominently," the report reads.

The committee recommended that the bill "include a single additional Part that addresses privacy safeguards and clearly sets out universal privacy protections."

The Intelligence & Security Committee Report on the
draft #IPBill can be read here: https://t.co/cLypYI9jUG pic.twitter.com/ay2NrwHM6r

Another shortcoming singled out by the committee's report is that the proposed law would extend the UK's already far-reaching surveillance program, enabling so-called "bulk surveillance."

If passed into law as it is, the bill would require that all Internet service providers store the browsing histories of all their customers for one year.

In the past, the measure has even been criticized by a former NSA official, who claimed mass data collection would make investigations less effective and endanger citizens.

The Committee underlined that much of the collection of personal data would happen without a warrant.

"The acquisition, retention and examination of any Bulk Personal Dataset is sufficiently intrusive that it should require a specific warrant," the report goes on.

"We recommend that Class Bulk Personal Dataset warrants are removed from the new legislation."

The Committee's recommendations have been welcomed by UK privacy advocates. Harmit Kambo, director of Campaigns & Development at London-based Privacy International, told Sputnik that the report was "extremely positive."

"There have been problems with this legislation, because after the Snowden revelation it should have put privacy at its heart, but it failed completely," Kambo told Sputnik.

Kambo said he hoped the report would have "a massive impact on the redrafting of the bill."

"It's vital that the Home office responds to the ISC's recommendation. It should not rush the bill's publication."

In criticizing the draft bill, Kambo said it was dogged by "utter lack of transparency," and that it gave the Home Office excessive powers when it comes to issuing warrants. "Judges should be in charge of that," he said.

000000
Popular comments
due to the sheer amount of interaction that now takes place online, there is a legitimate requirement for such powers. however, the concern is how those powers are regulated. the nature of the investigations requiring such an infringement would mean that the act itself and the circumstances surrounding it would not be open to scrutiny. the british people simply have to trust that the government is 'doing the right thing'. having access to a year's worth of browsing history also has particular benefits for market research. browsing habits are a powerful tool for profiling not only would-be criminals and terrorists, but consumers (...and voters) also. in the context of the large trade deals looming on the horizon, access to this kind of data takes on a new significance.