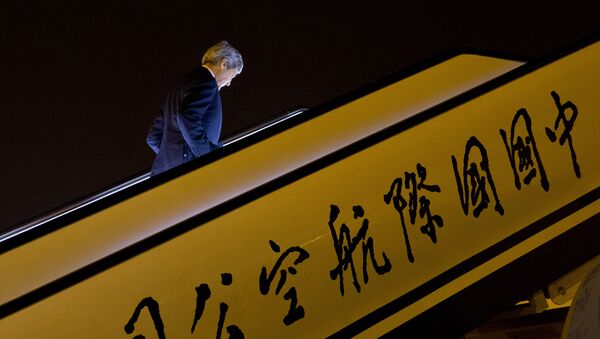 Instead of walking a tightrope between Washington and Beijing, Southeast Asia should establish stronger ties with China to bolster the region's economic development, Bangkok-based geopolitical analyst Tony Cartalucci notes, commenting on the issue of the upcoming US-ASEAN summit.

The US-ASEAN summit which will take place on February 15-16 is supposed to bring together leaders from the 10-nation Association of Southeast Asian Nations.

Although US State Department officials are insisting that the meeting is by no means an "anti-China" one, it is no secret that Washington has been boosting ASEAN as a counterpoint to China's regional influence.

"For decades the US has sought to stitch together a united front stretching from Central Asia, across Southeast Asia, and even into East Asia itself to encircle and contain China… The most recent manifestation of this policy of encirclement and containment has focused prominently on Southeast Asia, both through the Trans-Pacific Partnership (TPP) free trade agreement, and the US' sponsorship of an ongoing South China Sea dispute," Tony Cartalucci, a Bangkok-based geopolitical analyst, underscores in his article for New Eastern Outlook.

US Warship Sails Near Disputed Island in S China Sea Escalating Tensions
Cartalucci believes that Washington is trying to drive a wedge between Beijing and ASEAN nations by crook or by hook. It is the Obama administration who is currently fanning the flames of the South China Sea dispute, the analyst underscores.

Interestingly enough, Cartalucci's assumption is echoed by Simon Tay, a chairman of the Singapore Institute of International Affairs. In his analysis for South China Morning Post the scholar noted that the Obama administration will have to both balance the ASEAN group's diverse needs and try to avoid antagonizing Beijing.

"Very recently, US forces conducted a freedom of navigation exercise into waters that China claims. Military alliances in the region, especially with Japan and the Philippines, have also been re-emphasized. Many may therefore think that the US support for ASEAN unity is merely instrumental, a rallying call against Beijing," Tay stressed.

China Slams US Navy Warships in South China Sea as 'Paper Tigers'
Furthermore, Cartalucci continues, when an Asian nation tries to evade the territorial dispute, and even goes so far as to establish more close cooperation with China, Washington exerts economic and political pressure on it in order to drive the state away from Beijing.

"Indonesia has also been targeted by an array of political and terroristic attacks from Western-sponsored NGOs and militant groups as Jakarta increasingly drifts away from Western influence, and toward at least a more balanced relationship with Beijing," the analyst suggests.

While Washington makes every effort to maintain its influence in the region, it has nothing to offer to the rising Asian powers:

"In exchange, the US has only entangling military commitments, domineering 'free trade agreements,' and constraining political requirements to offer its potential 'allies' in the region," Cartalucci emphasizes.

According to Cartalucci the US political elite has recognized the fact that the rise of China is inevitable and now all Washington can do is "buy time in Asia."

"Their 'buying time' at the expense of Southeast Asia's prosperity and stability will leave a dominant China with weakened neighbors exhausted from years of attempting to fulfill Washington's doomed containment strategy," the analyst points out, stressing that Southeast Asian countries should not waste their time on US-ASEAN summits.

The Asian nations should jump on the China-led New Silk Road bandwagon to boost their own development. They should rise together with China to ensure the balance of power in the region.