Agreement on TTIP Unlikely to Be Reached During Obama Presidency 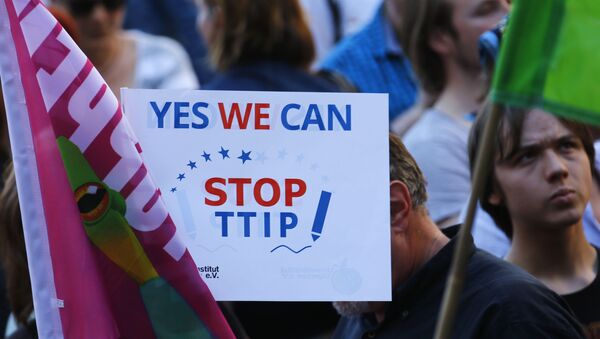 White House Press Secretary Josh Earnest said that a planned free-trade agreement between the European Union and the United States probably will not be reached during the presidency of Barack Obama.

Investment Court Has 'No Legal Basis' in TTIP - German Magistrates Union
NEW YORK (Sputnik) – A planned free-trade agreement between the European Union and the United States probably will not be reached during the presidency of Barack Obama, White House Press Secretary Josh Earnest said during a press conference on Monday.

"I do not believe that we are going to reach a TTIP [The Transatlantic Trade and Investment Partnership] agreement before the President leaves office but he’s certainly interested in moving those negotiations forward," Earnest said.

Earnest gave no timeline as to when the agreement may be finalized but added that he hopes the agreement will be made "under the leadership of the next US president."

The TTIP agreement would reduce barriers to trade in goods and services between Europe and its largest export market, the United States.

Negotiations on the agreement have been ongoing between Washington and Brussels since 2013. The 12th round of US-EU talks is due to be held in early 2016 with the aim of drafting the full text of the agreement before the end of the year.

Anti-TTIP activists criticize the trade deal for the unusual secrecy in which it is being negotiated, and are concerned that released sections of the document clearly show that it will benefit multinational corporations and corporate rights-holders at the expense of sovereign nations and consumers.