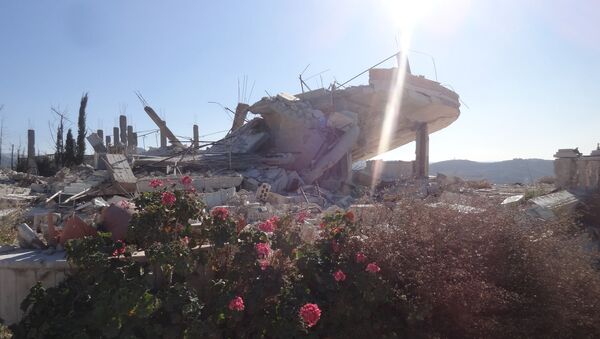 The clashes between Syrian government forces and armed Islamist troops have continued for more than five years now, changing the lives of thousands of Syrian citizens forever.

Refugees in Latakia Recalling Civil War Atrocities in Home City of Aleppo
The residents of towns were forced to move to safer regions in order to survive. One such place was the northern city of Latakia, where, despite the proximity to the front lines and absence of any support from the authorities, these people got a chance to rebuild their lives.

A RIA Novosti correspondent paid a visit to the refugee family and found out what they had to endure after being forced to leave their homes and flee the war zones.

“My family along with my then-future wife left Salma (city in northern Syria) just before the militants of Jabhat al-Nusra entered the city. Before the war I was a truck driver, I was involved in transporting vegetables. For the first time after moving to Latakia, we survived largely due to the fact that we were helped by local people,” Abu Farah said during an interview.

According to him, the city authorities do not deal with the resettlement of refugees from other regions and does not provide them with financial assistance, so the burden falls on the shoulders of the local community and the clergy.

“We're lucky because not many people receive the support that we had. Despite this, we lived in dreadful conditions: no food, no electricity. What can I say; we even didn’t have clean clothes to wear. My wife, who was once a children's doctor, five years ago suffered several heart surgeries and could no longer work.”

Wiped Out: Syrian Army Claws Back Strategic Heights in Latakia
Recalling the struggle, Abu Farah mentioned that he took up any job that was offered to him. “I took up almost any kind of work. I can only say that I harmed no one and even helped many who found themselves in a difficult situation. However, for me personally, the most important thing that remains is that my wife and I were able to go through this and stay alive. There is no turning back.”

The RIA correspondent was taken to a community where Abu Farah and his wife Suad are residing, where the correspondent met with the wife who shared her views of living in the new community and the dangers they faced.

"It’s always the common people, who are far away from political games who suffer the most. There are forces that want to take advantage of their plight, navigate the situation in a favorable direction for them,” Suad said.

She explained that in some disadvantaged areas of Latakia there are agitators of the militants who promise locals good money in exchange for Russian heads.

“The sum is about one million pounds (about 2.7 thousand dollars). For many of the people living here it is a real chance to get out of the terrible poverty in which they live,” Suad said.

The living conditions of displaced persons in Syria are far from European standards; hence, any additional household items give a great advantage. The couple the RIA correspondent met lives in just one room and the furniture consists of a table and a small bed. There is also a small oven around which neighbors of Abu Farah and Saud gather on cold Latakian evenings, hoping for warmer days ahead.