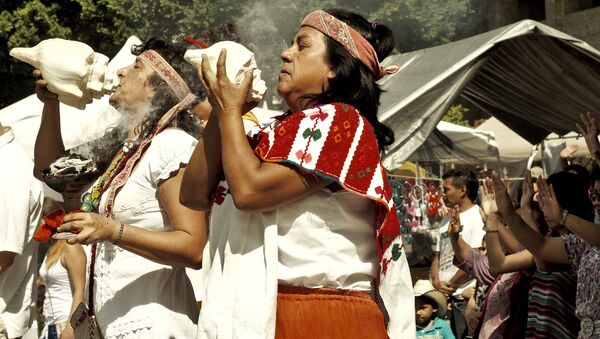 Ahead of a February 12 visit by Pope Francis to Mexico, around 30 indigenous communities in Michoacan, Mexico, have released a statement demanding that he apologize for killings of some 24 million aboriginal inhabitants, committed with the complicity of the Catholic Church during the colonization of the Americas.

Canada Discriminated for Years Against Indigenous Children
The Supreme Indigenous Council of Michoacan, Mexico, accused the Catholic Church of being involved in mass genocide, which started with the Spaniards' arrival to the Central American region in the 16th century.

The statement noted that, by the beginning of the 17th century, there were less than 700,000 native inhabitants left alive, from an original population of about 25.2 million, which makes the Spanish intervention and invasion of the Americas one of the largest acts of genocide in history.

"For over 500 years, the original people of the Americas have been ransacked, robbed, murdered, exploited, discriminated and persecuted," the statement reads. "Within this framework, the Catholic Church has historically been complicit and allies of those who invaded our land."

The communities also emphasized that colonizers' abuses included the forcing of European culture, language and Catholicism on the native peoples of Central America, and using the Bible as an "ideological weapon."

"The arrival of the Europeans meant the interruption and destruction of various original civilizations, which had their unique ideas and concepts of the world, our own government, writings, languages, education, religion and philosophy," they said.

Various Purepechas communities from Michoacan demanded that the Pope officially apologize for the church's role in the genocide of some 95 percent of the indigenous population of Central America within about a century following the beginning of the "European invasion."

World
Welcoming Jews Putin Shows 'Russia Respects Indigenous People'
During his visit to Mexico, Pope Francis will issue a decree authorizing the use of indigenous languages in mass celebrations. The controversial move is aimed at protecting the rights of native people in the country.

In 2015, the Pope apologized for "grave sins" committed against the native people of the Americas during an encounter in Bolivia with indigenous groups and in the presence of Bolivia's first-ever indigenous president, Evo Morales.