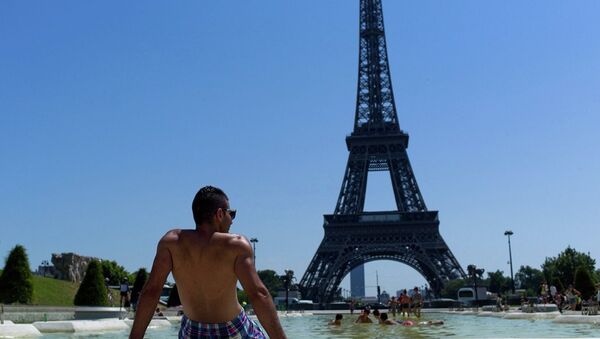 © AP Photo / Thibault Camus
Subscribe
French authorities have recently been talking about the need to lift the anti-Russian sanctions, the role played by the agricultural lobby and the chances of the food embargo being removed. Yuri Rubinsky, the director of the Institute of French Studies in Moscow, discussed the matter in an interview with Gazeta.ru online paper.

High Time for a Thaw: France Backs Lifting of Anti-Russian Sanctions
When asked whether the French desire to lift the sanctions in defiance of German opposition reflected the official position of the government, Yuri Rubinsky said that the idea, proposed by Economics Minister Emmanuel Macron was fully shared by President Francois Hollande and Prime Minister Manuel Valls.

“The French business community is trying to conserve its presence in the market and wants to keep its business going, instead of shutting it down only to restart again,” he said.

Even with the Western sanctions in place, a number of bilateral accords were signed during Emmanuel Macron’s visit to Moscow, including in the field of helicopter building and nuclear energy.

Russia and France may be rivals in the Third World markets but at the same time they remain allies. France, unlike Germany, refused to scrap its nuclear energy production.

When asked why France wanted the anti-Russian sanctions go, Yuri Rubinsky said that first, because its trade turnover with Russia had dropped to just over $10 billion over the past 12 months, and kept going down.

“Before the sanctions were introduced France was Russia’s fourth biggest trade partner in the EU after Germany, Italy and The Netherlands. Now the trade turnover is almost 40 percent down with Russian exports to France a tad over $5 billion, just like the French exports to Russia,” he added.

The French agricultural lobby has been the most vocal proponent of lifting the sanctions. France accounts for a hefty 40 percent of the EU’s farming production and pig farms, especially in Brittany, play a big role here.

The pig farmers’ economic losses from the sanctions amount to $50 billion  and they shared their frustrations with Agriculture Minister Stéphane Le Foll, who likewise  wants the sanctions to go and also happens to be a close friend of President Hollande.

“With the 2017 presidential and parliamentary elections less than a year away, the government and the President who apparently wants to run again are very sensitive to the public sentiment,” Yuri Rubunsky emphasized.