New Facts Confirm A321 Crash Over Sinai Was Terrorist Act 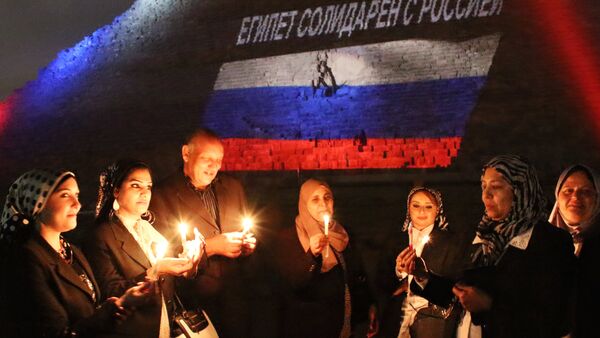 © Sputnik / Nadim Zuaui
/
Go to the photo bank
Subscribe
Russia’s version that the A321 crash over Egypt’s Sinai Peninsula in October was a terrorist attack has received more confirmation, Russian Ambassador to Egypt Sergei Kirpichenko said.

CAIRO (Sputnik) – The ambassador said there are many variations of explaining what happened to the A321 that crashed killing all 224 on board.

“But there are completely clear facts. The Russian version of the accident that was voiced by [Russian President Vladimir] Putin is well known. Nothing has changed since then. On the contrary, what the president had said is finding new confirmation,” Kirpichenko told RIA Novosti in an interview.

Moscow, London Maintain Dialogue on Russian A321 Plane Crash
“It is here, of course, that some difficult moments arise in so-called tactical differences, like how to handle and move the case on. It’s here that there are different points of view between us and the Egyptians. But it seems to me that these moments are insignificant in character and are surfacing from the common desire to reach a concrete result,” the ambassador added.

“Our specialists do not only have access, but are the main force in the investigation, if you want to call things by their appropriate name,” Kirpichenko told RIA Novosti.

The ambassador said that late last week another group of Russian and Egyptian specialists arrived at the crash site of the A321 passenger jet.

“I’ll note that everything that is done on Egyptian territory is done using joint efforts. As you can imagine, this is crucial so that we obtain the needed results in the end,” the ambassador added.

On October 31, 2015, the Russia-operated Airbus A321 crashed en route from the Egyptian resort of Sharm el-Sheikh to St. Petersburg as a result of an explosion on board. Daesh, which is outlawed in Russia and many other countries, claimed responsibility for planting a bomb on board the aircraft.

Shortly after the crash, Moscow and Cairo reached an understanding on the investigation, and an international Egypt-led probe was launched. Following the incident, Russia suspended flights to and from Egypt, underscoring that it was not a political move, but an effort to ensure the safety of Russian passengers.

In late January, media reports suggested that Russian security services had identified an Egyptian airport employee as a perpetrator of the A321 explosion over the Sinai Peninsula.