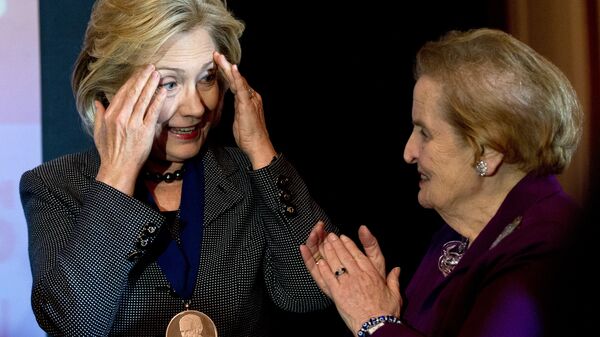 A prominent economics professor and political thinker has penned an article in which he calls Clinton a “war candidate” in the pocket of the military industrial complex.

Jeffrey Sachs, a world-renowned professor of economics, has authored a column in which he attacks presidential frontrunner Hillary Clinton for her ties to the military industrial complex. Sachs, a senior UN advisor, bestselling author, and syndicated columnist, said Clinton’s decisions as Senator and as Secretary of State have put the US in danger and led to an unending state of conflict.

Africa
Hillary Clinton Destabilized Libya so the West Could 'Exploit the Country'
“The idea that she is bad on the corporate issues but good on national security has it wrong,” Sachs writes. “Her so-called foreign policy "experience" has been to support every war demanded by the US deep security state run by the military and the CIA.”

Sachs goes back to the administration of Bill Clinton, noting that the Clintons both have accepted money from both Wall Street and weapons contractors who have an interest in the US taking an active role in conflict around the world.

“Just as the last Clinton presidency set the stage for financial collapse, it also set the stage for unending war. On October 31, 1998 President Clinton signed the Iraq Liberation Act that made it official US policy to support ‘regime change" in Iraq,” Sachs explains.

Sachs points out that, later in 2003, Hillary voted for war with Iraq in the US Senate, a war which many now criticize for having destabilized the region and helping push the US to financial collapse.

Going forward in time, Sachs calls Clinton’s “record as Secretary of State is among the most militaristic, and disastrous, of modern US history.”

US Billionaire Soros Donates $6Mln to Support Clinton's Presidential Run
“Hilary was a staunch defender of the military-industrial-intelligence complex at every turn, helping to spread the Iraq mayhem over a swath of violence that now stretches from Mali to Afghanistan. Two disasters loom largest: Libya and Syria.”

Sachs places a lot of blame on Clinton for the crisis in Syria.

“Perhaps the crowning disaster of this long list of disasters has been Hillary's relentless promotion of CIA-led regime change in Syria,” he writes. “Once again Hillary bought into the CIA propaganda that regime change to remove Bashir al-Assad would be quick, costless, and surely successful.”

He also charges Clinton with fostering the current situation between the US and Russia.

“Hillary's support at every turn for NATO expansion, including even into Ukraine and Georgia against all common sense, was a trip wire that violated the post-Cold War settlement in Europe in 1991,” Sachs says. “As Senator in 2008, Hillary co-sponsored 2008-SR439, to include Ukraine and Georgia in NATO. As Secretary of State, she then presided over the restart of the Cold War with Russia.”