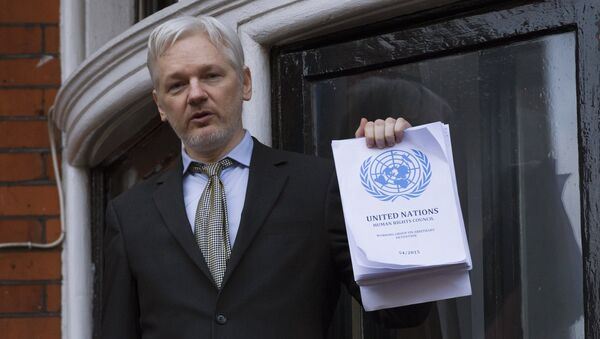 The UN ruling saying Julian Assange was arbitrarily detained puts both British and Swedish governments in an “embarrassing” position and will have an undeniable impact on decisions made by the courts around the world in the future, Edward Snowden's legal representative Robert Tibbo said in an interview with Radio Sputnik.

The UN ruling will push Swedish authorities toward a decision on how they could further pursue Assange if they actually could in the current situation, Tibbo stated. At the same time it will make the UK reconsider if it really can legally deport the whistleblower from the country.

“Any decisions by the courts before this new legislation would not apply to those individuals. That assumes that those individuals have been already removed from the UK,” Tibbo pointed out talking about the conundrums that indicate the situation for London has dramatically changed.

The Assange Saga: 'Victory of Historical Importance' for Wikileaks Founder
Tibbo explained it would be extremely difficult for British authorities to justify the Assange’s removal to Sweden, which is based on old law.

When it comes to Assange, the expert says he is in a “strong position right now.” Both the UK and Sweden should work out a review of the Assange case considering the new political reality. Tibbo added that the WikiLeaks founder should stay “where he is right now” and let the discussions on the political issues related to his detention naturally play out.

Assange applied for asylum at the Ecuadorian Embassy in London in 2012 after a British court permitted his extradition for sexual assault accusations. The assault claims were later dropped.

UK Foreign Secretary Calls Assange ‘Fugitive From Justice’
The whistleblower has repeatedly expressed concern over his extradition to the US by Stockholm that would follow his removal to Sweden.

Stressing that the Assange case presents a unique situation and is different from those of other acknowledged whistleblowers like Edward Snowden and Chelsea Manning, Tibbo suggested the UN ruling would be a precedent courts wouldn’t be able to avoid in future.

“Definitely this UN report is a document that can be put before courts of any jurisdiction to be considered. And it’s a compelling report. So yes, it will have an impact in future on how courts will take on publishers and whistleblowers,” he concluded.