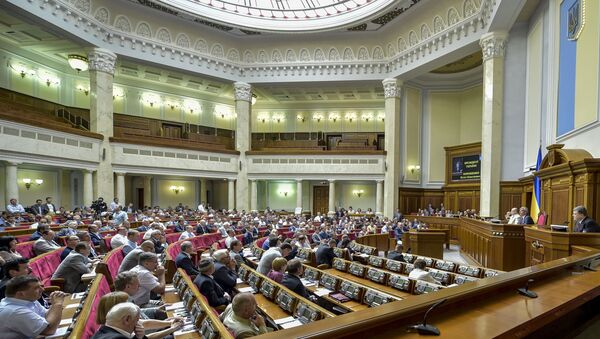 © Sputnik / Nikolay Lazarenko
/
Go to the photo bank
Subscribe
Ukraine may fall apart if it does not become a federation. Many Ukrainian and Russian experts insist that, despite Kiev’s official dismissal of the idea, this switch to a federative state is already taking place.

Poroshenko Vows Not to Postpone Vote on Ukraine's Decentralization
Last week one of Ukraine’s regional legislatures asked President Petro Poroshenko and his government to approve a constitutional provision whereby regional governors would be elected by the people and not appointed by the President.

President Petro Poroshenko dismissed the proposal as a ”direct step” towards federalization, which he said he would never allow to happen.

Decentralization and granting an autonomous status to Donbass — one of the main provisions of the Minsk accords – were supposed to have been approved before the end of last year.

The presidential draft won preliminary approval in August 2015 but political discussions about the need to turn Ukraine into a federative state rage on.

“Failure to decentralize may put the very future of Ukraine as a state on the line, especially given the centrifugal forces existing between the regional elites and the central government,” Oleg Bondarenko, a Moscow-based political analyst said during a recent roundtable organized by the newspaper Komsomolskaya Pravda.

Rostislav Ishchenko, the head of the Center for Systemic Analysis and Forecasts, said that federalization of Ukraine was an objective process, which has been going on for quite some time now.

“There is no way you can stop it. You could try to slow it down, but this will exacerbate even further the frictions that already exist between the regions and the federal center. This will eventually bring the situation to a head and precipitate the breakup of Ukraine as a single state,” Ishchenko warned.

He added that if President Poroshenko attempted to greenlight the federalization process he would antagonize the parliament, the government and even his own team. On the other hand, he is under foreign and regional pressure to do exactly this.

Both agreed, however, that the process of de facto federalization was already on.

“This is part of an objective process Poroshenko can neither stop nor reverse no matter what he says,” Rostislav Ishchenko noted.

US-Favored Forecast for Ukraine: Cabinet Reshuffle, Yatsenyuk Better Stay
With the federal center weakened as a result of the political and military upheavals of the past two years, the regional elites, above all in such “budget-forming” regions as Kharkov, Zaporizhia and Dnepropetrovsk have obtained a great deal of self-rule and this process regional “autonomization” will continue elsewhere in the country, he added.

Ukrainian experts who took part in the roundtable agreed with Dmitro Dzhangirov mentioning the ongoing tug-of-war between the “weakening regional elites and the federal center.”

Kost Bondarenko, the head of the Ukrainian Politics Center in Kiev said that even though describing this process as federalization was a bit premature, “what we now see is a revision of the principle of a “unitarian state” as it was enshrined in the Ukrainian constitution in 1996.”

“There are at least three constitutional drafts now being considered in Ukraine and each contains a provision whereby regional governors should be elected and not appointed,” Bondarenko said.

Also being mulled is the so-called “Italian model” where the regions in a unitarian state enjoy a great deal of self-rule.

“What is absolutely clear is that Ukraine’s outdated political makeup needs a change, just like that status of the regional governors,” Kost Bondarenko emphasized.

000000
Popular comments
a slow process then. But will the eu or us be able to make a profit from ukraine in the meantime if the conditions are deteriorating as is being suggested in various articles?
michael
7 February 2016, 01:51 GMT
000000
Newsfeed
0
New firstOld first
loader
LIVE
Заголовок открываемого материала
Access to the chat has been blocked for violating the rules . You will be able to participate again through:∞. If you do not agree with the blocking, please use the feedback form
The discussion is closed. You can participate in the discussion within 24 hours after the publication of the article.
To participate in the discussion
log in or register
loader
Chats
Заголовок открываемого материала
Worldwide
InternationalEnglishEnglishMundoEspañolSpanish
Europe
DeutschlandDeutschGermanFranceFrançaisFrenchΕλλάδαΕλληνικάGreekItaliaItalianoItalianČeská republikaČeštinaCzechPolskaPolskiPolishСрбиjаСрпскиSerbianLatvijaLatviešuLatvianLietuvaLietuviųLithuanianMoldovaMoldoveneascăMoldavianБеларусьБеларускiBelarusian
Transcaucasia
ԱրմենիաՀայերենArmenianАҧсныАҧсышәалаAbkhazХуссар ИрыстонИронауОssetianსაქართველოქართულიGeorgianAzərbaycanАzərbaycancaAzerbaijani
Middle East
Sputnik عربيArabicArabicTürkiyeTürkçeTurkishSputnik ایرانPersianPersianSputnik افغانستانDariDari
Central Asia
ҚазақстанҚазақ тіліKazakhКыргызстанКыргызчаKyrgyzOʻzbekistonЎзбекчаUzbekТоҷикистонТоҷикӣTajik
East & Southeast Asia
Việt NamTiếng ViệtVietnamese日本日本語Japanese俄罗斯卫星通讯社中文（简体）Chinese (simplified)俄罗斯卫星通讯社中文（繁体）Chinese (traditional)
South America
BrasilPortuguêsPortuguese
NewsfeedBreaking
18:08 GMTVolcano Continues to Erupt on Spanish Island of La Palma
17:49 GMT'US Hegemonic System' Has 'Failed Miserably', Iran's Raisi Tells UN
17:24 GMTUSAF Reveals It Has Five New B-21 Strat Bombers in Production, Not Two as Originally Reported
17:07 GMTAncient Pyramid Made From Volcanic Ash Likely Built to 'Calm Earth’s Anger,' Media Says
17:00 GMTDozens Protest Outside UN Headquarters Against US Global Military Engagements
16:43 GMTUS House Democrats Introduce Legislation to Prevent Presidential Abuses
16:35 GMTPalestinians Ready to Renew Talks With Israel If They Show Readiness, Foreign Minister Says
16:31 GMTRussian Embassy in UK Slams Scotland Yard's Approach to Fact-Finding in Skripal Case
16:30 GMTWhat's Going On? Dog Looks Terrified as It Hears People Quarrelling
16:29 GMTSpanish Press Slams Barcelona After Spanish Giants Fail to Beat Minnows Granada in La Liga
16:26 GMTUS Suddenly ‘Concerned’ About Shortages of Gas in Europe After Spending Years Fighting Nord Stream 2
16:06 GMTAUKUS Will Not Have Any Impact on Quad, Says Indian Foreign Secretary Ahead of Leaders' Summit
16:02 GMTUS Space Force Commander Claims Russia Has Armed Satellite in Orbit to Destroy US Assets
15:54 GMTLust For Money, Not Sex Game, Killed British Heiress, Swiss Court Has Heard
15:40 GMTUS Sanctions Russia-Based Cryptocurrency Exchange Platform SUEX OTC
15:29 GMTMessi to Miss PSG's Next Game Against Metz as Club Confirms Argentine's Knee Injury
15:20 GMTScientists Developing Versatile ‘Nano Couriers’ for Future Medicine
14:56 GMT'To Ban or Not to Ban': US Agencies Reportedly Split on Whether to Blacklist Huawei's Spinoff
14:28 GMTSotheby's to Hold First-Ever Art Sale Show in Post-Soviet Russia
14:19 GMTSpanish Island of La Palma's Airport Operating Normally Amid Volcano Eruption