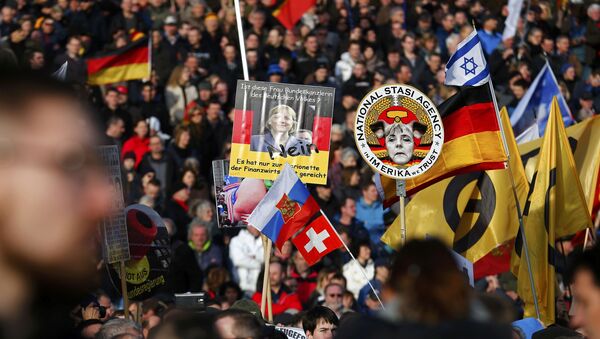 A series of protest rallies organized by Germany's far-right political movement Pegida took place across a number of European countries on Saturday, with activists opposing the "Islamization of Europe" and demanding to stop the influx of migrants.

About 15 thousand people took to the streets in Dresden on Saturday holding placards and banners and demanding the resignation of German Chancellor Angela Merkel, media reported.

The activists were protesting against the current policy of open doors towards migrants and called on the German government to stop the "Islamization of Europe".

Similar protests were also held in France, Great Britain, Poland, the Czech Republic and the Netherlands. Earlier it was reported that about 20 people were detained during a similar protest campaign in the city of Calais in northern France.

"The number of right-wing marches in 2015 is frightening; the number of participants has increased by five times compared to 2014," said representative of the Left party in the Bundestag Ulla Jelpke.

Pegida Plans More Anti-Immigrant Protests in Germany Over NYE Sex Attacks
Pegida, an acronym for Patriotic Europeans Against the Islamization of the West, began organizing rallies in its home city of Dresden, Germany, in October 2014, attracting hundreds and later thousands of supporters.