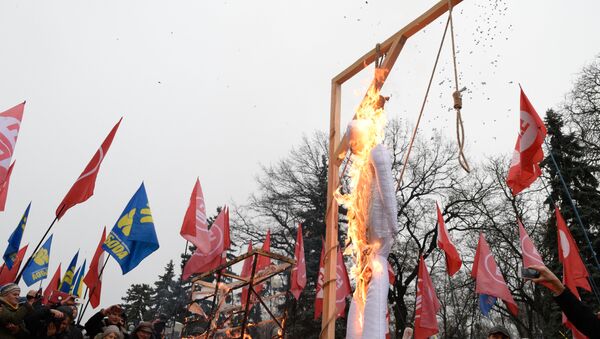 Ukraine is on the verge of political suicide, Germany-based expert Joerg Forbrig warns, stating that the country's much disputed political and economic reforms have eventually come up against a brick wall.

The current state of affairs in Ukraine strongly resembles the failure of the "Orange Revolution" a decade ago, according to Joerg Forbrig, Central and Eastern Europe expert at the German Marshall Fund of the United States.

Despite Kiev having repeatedly pledged its commitment to carry out structural reforms, the country's deeply corrupt political system has remained untouched, the expert stresses.

"Ukraine's fledgling democracy edged closer to dismembering itself this week, as one of the most reform-minded members of the government stepped down. In his resignation letter, Economy Minister Aivaras Abromavicius accused old political elites of systematically blocking much-needed reforms and paralyzing the fight against rampant corruption; and singled out a close confidant of President Petro Poroshenko as one of the main culprits," Forbrig writes in his op-ed for Politico.

Fleeing a Sinking Ship: Ukrainian Minister's Resignation Just the Beginning
"It has become clear that any kind of systemic reform is decisively blocked. It is more than the mere lack of support or political will. These are concrete actions aiming to paralyze our reform efforts, ranging from a sudden removal of my security detail to the pressure to appoint questionable individuals to my team or to key positions in state-owned enterprises," Abromavicius wrote in an official statement published on Ukraine's Ministry of Economic Development and Trade of Ukraine website.

"Evil forces still want to wind things back," he warned.

Abromavicius' move has prompted a heated debate among European politicians and economists regarding the future of Ukraine.

By resigning @aivaras_aivaras has put the spotlight on urgency of further measures to combat corruption in Ukraine. https://t.co/Wy9i8MH30L

"It is important that Ukraine's leaders set aside their parochial differences, put the vested interests that have hindered the country's progress for decades squarely in the past, and press forward on vital reforms," the joint statement read, signed by the ambassadors of the US, the UK, Germany, France, Italy, Japan, Sweden, Switzerland, Canada and Lithuania.

G7 Ambassadors Stress the Need for Ukraine to Accomplish IMF Reforms
Forbrig points out that Kiev's inability (or unwillingness) to put the changes into effect has resulted in a "loss of faith", both at home and abroad.

"Hopes for swift improvement have been shattered and confidence in the government, and its political elite, has reached all-time lows," he notes.

Ukraine's "uneasy political coalition" is falling apart at the seams, while reformers feel increasingly exhausted by the futility of their efforts.

"If the government fails in Kiev, it will have a direct effect on political and economic support from the West. Ukraine's many skeptics will gain the upper hand, and its few friends will face a steep uphill struggle. Reduced assistance — whether political, financial, administrative or military — will eventually forfeit the modest gains Ukraine has made, and expose the country's many vulnerabilities," Forbrig warns.

"The situation eerily resembles the failure of the 'Orange Revolution' a decade ago. But the collapse of the current government — and a likely succession by a less reform-oriented one — would be far more disastrous," he adds.

According to the expert, Ukraine can still escape the political suicide, but time is running out.