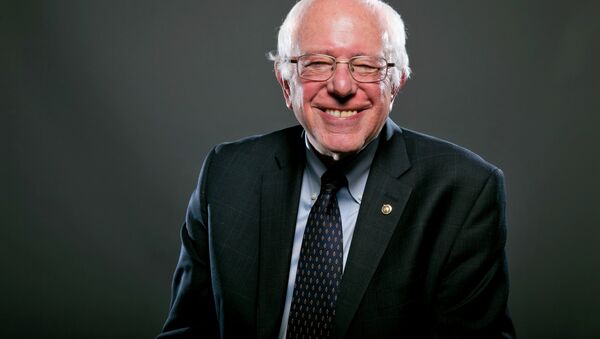 © AP Photo / Jacquelyn Martin
Subscribe
International
India
Africa
Bernie Sanders supporters have found a new use for the dating app Tinder: turning it into a platform to campaign for their favorite Democratic candidate. The company appears not to be ‘feeling the Bern,’ however, and has begun banning users for spreading the Vermont Senator’s message.

A woman from Iowa and another from New Jersey, both members of a Facebook group called “Bernie Sanders Dank Tinder Convos (BSDTC),” which has 782 members and is a spinoff of the massively popular “Bernie Sanders Dank Meme Stash,” have both confirmed that they have been banned from the service after being reported by other users. The two women claim that they do not work for the Sanders campaign.

On Friday, both women received notices from Tinder that their accounts were locked for sending unsuspecting men messages about why they should support Sanders in the primaries.

Robyn Gedrich, 23, had been messaging around 60 people a day for the past two weeks, in support of Sanders and inviting them to receive updates on how they can get involved in the campaign.

Some men and women belonging to BSDTC have paid for Tinder memberships so that they can find users in New Hampshire and other important primary states.

Sanders, Rubio Strongest Candidates in General Election Matchups
A member of BSDTC who wishes to remain anonymous told Sputnik she has had mixed luck with her efforts — but claims she has had several men post that they would switch their party registration and vote for Sanders in the primary if she told them how to go about it. The unnamed woman suggested that, since several of her photos on the app are of her and Sanders, many people she matches with have actually brought the candidate up in posts before she approached them.

The unidentified woman told Sputnik News she is not in the relationship market, but had paid for an account so that she can choose her own location. She says that she has been posting with both men and women in New Hampshire about the importance of getting out to vote in the upcoming primary.

“It’s much easier than phone banking, as you are speaking to people who already expressed interest in talking to you — but can have the same effect,” she told Sputnik.

The anonymous woman has not been banned, and states that she has no intention of stopping her personal campaign until she is.