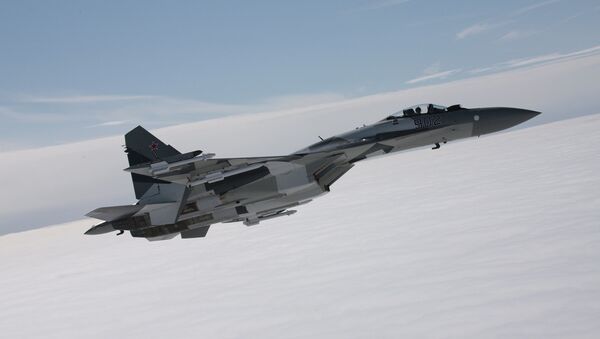 Newest Russian Su-35 figter jets will be on constant standby at Hmeyimim airbase in Syria, representative of the Russian Air Forces in Syria told journalists.

“The planes will be kept in a state of constant readiness, with a pair of Su-35 ready to take off at a moment’s notice to provide assistance to other aircraft. A pair of Su-35 jets is capable of increasing other planes’ 360-degree detection radius up to 400 kilometers,” a representative of the Russian Aerospace Forces battlegroup in Syria told journalists.

According to the representative, the Su-35 is a multirole combat aircraft which will be used as an escort for the Russian aviation in Syria, as well as for attacks against ground and underground targets.

"At present, we have a task to use these jets as effectively as possible. These jets can carry all kind of bombs," the representative said.

Syria has been mired in a civil war since 2011, with the country’s government fighting against multiple opposition factions and extremist groups. The Russian Aerospace Forces have been conducting an aerial campaign against Islamist positions in Syria since September 30, following a request from President Bashar Assad.