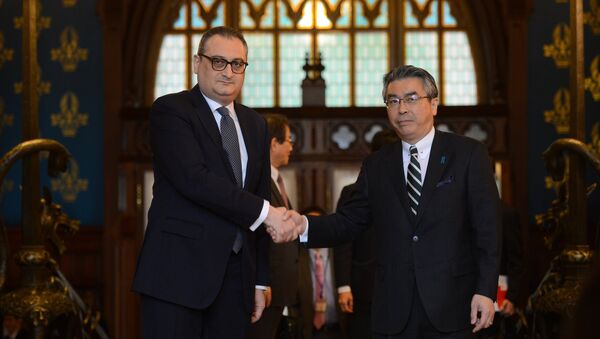 "We agreed to hold the meeting in February at the level of deputy foreign ministers and we are currently dealing with this issue, however the exact date has not been set yet. Regarding the context [of the meeting] the diplomats will discuss the Japan-Russia relations in general, including talks about the peace treaty," Kishida said at a press conference.

The minister refused to comment whether the diplomats would discuss Prime Minister Shinzo Abe's long-anticipated visit to Russia, having stated that "nothing concrete can be said at the current stage."

In December 2015, it was reported the deputy foreign ministers of Russia and Japan would meet in order to prepare for Abe's visit to one of the Russian regions, planned for the spring of 2016.

Earlier in the day, Japanese media reported that Abe would visit Russia and European member states of the G7 in late April — early May.

Japan and Russia never signed a permanent peace treaty after World War II because of a disagreement over four islands, which Russia calls the Southern Kurils and Japan the Northern Territories. The disputed islands, located in the Sea of Okhotsk, were claimed by Soviet forces at the end of WWII.