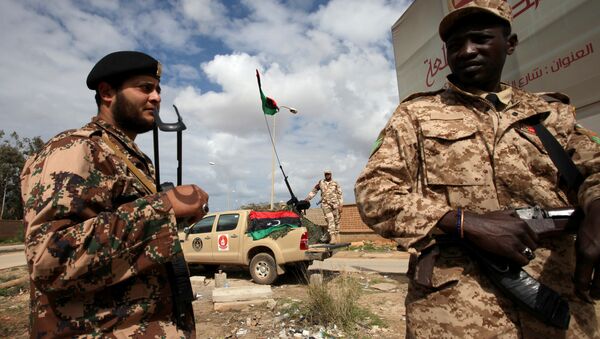 © AP Photo / Mohammad Hannon
Subscribe
The US and EU are urging Libya's factions to form a national unity government and warning that to do otherwise would invite the rapid expansion of Daesh (Islamic State/ISIL); however, the widely-discussed unity government is merely a fig leaf for another NATO intervention in the region, according to political analyst Salman Rafi Sheikh.

Vicious Cycle: NATO's New Libyan Military Campaign About to Begin
Officials from 23 countries held a meeting in Rome, Italy on February 2 to discuss the fight against Daesh in Libya. The terrorist group, which is seeking to seize Libya's major oil fields and ports, poses an imminent threat to the nation.

The participants of the meeting warned that the time to stabilize the country in the face of the Daesh menace is running out and urged Libya's factions to set their differences aside and form a national unity government.

"An important aspect that has been largely ignored in this debate is that the Western powers are not pushing for signing the peace accord to merely pre-empt the emergence of ISIS [Daesh] in Libya — from where it can have access to Europe — but to place themselves as the final arbiter in Libya, a demi-god so-to-say, to consolidate their otherwise shaky position in global geo-politics in the wake of the Russian resurgence," Salman Rafi Sheikh, a research analyst specializing in international and Pakistan's foreign and domestic affairs, writes in his article for New Eastern Outlook.

Washington and the European nations are considering a potential military operation in the region. The UK has already sent a small contingent to Libya to examine the possibility of deploying British troops, "in a training and advisory role," the Guardian reports.

US Considering 'Military Action' in Libya to 'Save' Africa From Daesh
European powers are weighing options, including sending a 6,000-strong Italian-led military force to Libya.

The Obama administration is seemingly ready to take part in the operation. Citing White House officials, The New York Times reported on January 26 that "the campaign in Libya could begin in a matter of weeks."

What Washington and the European states need is an official request for military assistance from Libya's legitimate unity government.

"The key question here is: if the West is, after all, going to militarily intervene in Libya, why does it need to install a national unity government in the first place? The answer lies in their Syria experience. As opposed to the West's way of [conducting] illegitimate interventions across the world, the Russian military campaign against Islamist forces in Syria is fully legitimate in that it started only after Russia was invited by the Syrian authorities," Sheikh explains.

"Nobody is thinking about requesting foreign intervention at the moment. We are willing to fight [Daesh] ourselves," Ibrahim Dabbashi, Libya's ambassador to the UN, said last month, as quoted by Al-Jazeera.

Furthermore, in his latest interview with Der Spiegel, Martin Koble, the UN's special representative to Libya from Germany, admitted that the factions seem to fight each other more than Daesh.

"…the awareness that people need to be coming together to counter this threat [Daesh] is still lacking. My fear is that the political process will progress more slowly than the military process," Kobler emphasized, adding that Berlin is considering sending military advisors to the country to provide training for Libyan security forces.

​"The key question that must be asked is what would happen if the accord is not signed and a unity government not established?" Sheikh asks.

The Pakistani geopolitical analyst poses yet another question: whether or not the "national unity government" will be able to curtail Daesh's advance in Libya.

Either way, it is likely that Washington and its NATO allies will unleash a full-scale military invasion of Libya under the pretext of fighting Daesh, he stresses.

"Western intervention and long term military presences are, therefore, necessary evils that will be imposed upon the Libyans," the analyst points out.

"It has been clear to all parties since that time that once and if a unity government is created, this would make it much easier for the West to re-establish itself there militarily and acquire much necessary geo-strategic leverage," Sheikh concludes.