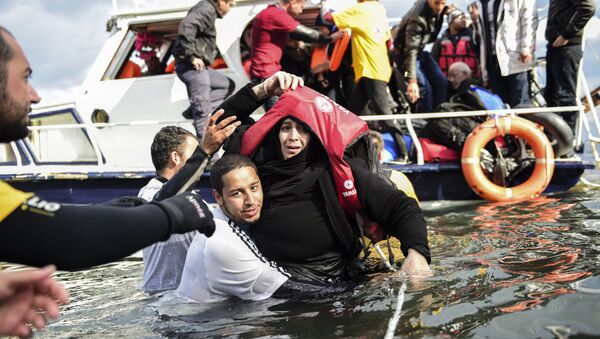 A European Commission report, detailing a plan to criminalize volunteers rescuing refugees from drowning, has been revealed by UK civil liberties group Statewatch. The EU is desperate and is therefore making bad decisions, the group’s director told Sputnik.

Statewatch, a London-based civil rights watchdog, has published a confidential report by the European Commission, which reveals the plans of the Council of the European Union to pass a new law, criminalizing volunteers who rescue refugees, stranded off the coast of Greece, from drowning.

The new proposals would penalize NGO’s, local people and volunteers — all providing humanitarian assistance to refugees arriving in the EU – and would remove their exemption from being considered people smugglers.

"The EU has failed, they’re desperate. They’re trying to take over operations [in Greece] to take control of everything," Tony Bunyan told Sputnik.

"I’ve been doing this for 25 years and have never seen anything like it. The EU is in a complete mess. They failed to respond quickly to what happened last spring. The volunteers and smaller NGOs have been helping refugees since the crisis began. Where was the EU then? They only tuned up in November [2015] and by that time already 700,000 people had landed in Greece."

Petition to Nominate Greeks for Nobel Peace Prize Gains Some 290,000
The Council of the European Union is presenting its conclusions and laying down policy guidelines for the European Commission to follow. According to Mr Bunyan, these conclusions are non-binding, and give member states the power to act on the Council’s recommendations and on how to interpret criminalizing humanitarian assistance by civil society, locals and volunteers.

This means member states have the power to decide for themselves whether to criminalize those who are aiding refugees.

"There are ten countries in Europe that are exempt from this and where offering humanitarian assistance is not an offense. There are also ten others where facilitating 'staying' isn’t an offence either," Mr Bunyan said.

"Before it was illegal for buses and taxis to transport refugees in Greece, but they changed the law in July [2015] and now private individuals can give refugees a lift."

The EU Council’s proposals to criminalize volunteers rescuing refugees from drowning also aim to protect those arriving by sea from people smugglers and human traffickers – or so they say.

"Refugees will continue to rely on smugglers to reach Europe via Greece unless the EU comes up with a viable alternative for them."

According to Mr Bunyan, however, there is a well-known distinction between "smuggling" and "trafficking".

"There is an important difference between trafficking and smuggling. The International Organization for Migration (IOM) explains it on their site. What’s happening in the EU with the refugee crisis is predominantly people smuggling."

"Sure there are human trafficking rings exploiting refugees arriving in Europe, but when a migrant gets on a boat they make a deal to be smuggled into a country, disembark and that’s the end of that relationship. Human trafficking is different – migrants don’t consent to it. The difference is very important," Mr Bunyan told Sputnik.

The document published by Statewatch also reveals EU’s plans to create a state-run agency that would force NGOs and their members to register with the police.

"It’s a toxic mix. The EU state wants to take over all operations. Frontex [EU’s border agency] will be extended and they will work with the national border guard, but this means that everything local will come under their control. Today, Frontex in Greece has to obey both EU and local Greek law. The new law will mean that the national Greek border guard will have to obey the EU."

The EU Council's proposals would also require NGOs and its members to register, incorporating them into state structures.

"They want NGOs and their members to hand over all their personal information and names. Can you imagine? NGOs don't have to do that. It's an outrage."

Working in #Greece for @Khalsa_Aid to support #refugees

Even though media is quiet — much more needs to be done pic.twitter.com/buRTV8lxt8

Local councils have also been making life difficult for NGOs working in Greece. Some have even threatened refugee shelters.

"Councils are making life for smaller NGOs extremely difficult. One council threatened to shut down the Hope Centre, a refugee shelter in Lesvos. And only last week, their medical tent was burned down. I’m not saying the two are connected or that the council is responsible but it just shows you that there are some bad people in the area," Mr Bunyan told Sputnik.

ANNOUNCEMENT RE THE HOPE CENTRE, LESVOSOne day after the right wing minority of Molyvos set fire to the WAHA Medical…

Posted by Positive Action in Housing on Saturday, January 30, 2016

And the situation is only deteriorating.

"Greece has given into the EU — because it has all the money. It’s also threatened to kick it out of the Schengen. They are only letting refugees from Syria, Iraq and Afghanistan pass through the Greek-Macedonian border… but that’s the first hurdle. These people then want to go to Germany and Austria.

"There is an invisible wall which is coming down and a certain number of people are going north, and there is another invisible wall, in the sea by Greece and Turkey, which is being put up by the EU."

The European Union has struggled to deal with the refugee crisis as people began fleeing war-torn countries in the Middle East and North Africa, and arriving on European shores in their thousands. Greece – being one of the initial entry points for those desperately seeking to get away from conflict – has borne the brunt of the influx of migrants.

"Civil society needs to get organized, and the EU needs to differentiate between 'smugglers' and 'human traffickers' and stop criminalizing volunteers," Mr Bunyan told Sputnik.