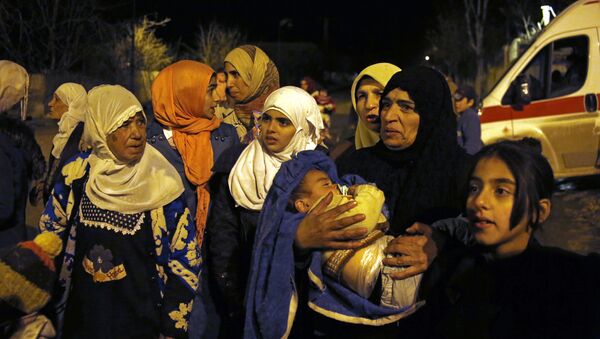 Simon Ingram, the UNICEF Middle East and North Africa chief of communication said that the world has really started to recognize the problem of Syrian crisis, has a reality check on a full scale of the issue and the threat that it poses not for the region but beyond.

WHO Expects Syria Support Conference to Raise More Money Than Before
LONDON (Sputnik), Svetlana Alexandrova – The Supporting Syria and the Region donor conference underway in London has for the first time made the world realize the dire humanitarian crisis in the Arab republic, the UNICEF Middle East and North Africa chief of communication told Sputnik on Thursday.

"I think that for the first time, the world has really started to recognize the problem, has a reality check on a full scale of the Syrian crisis and the threat that it poses not for the region but beyond," Simon Ingram said.

Based on speeches made at the donors conference so far, there emerged a realization that "a different level of response is needed."

"This time we are in a new, different situation," Ingram stressed.

The United Kingdom urged participants to double their contributions to humanitarian aid ahead of the fundraising event to meet the United Nation’s appeal for $7.73 billion. Downing Street pointed out that, last year, only $3.3 billion of the requested $8.4 billion was donated.

London to Support Syria With $750Mln in 2016, $410Mln Annually in 2017-2019
UN High Commissioner for Refugees Filippo Grandi said last year’s humanitarian appeal generated half of what was needed.

The 2016 Supporting Syria and the Region conference is co-hosted by the United Kingdom, Germany, Kuwait, Norway and the United Nations. Its stated aim is to raise "significant new funding" for short- and long-term humanitarian support for the Arab republic, which has been ravaged by a nearly five-year civil war.

According to the UN refugee agency, 13.5 million Syrians are displaced inside the conflict-torn Arab republic, while about 4.6 million people fled the country, mostly to neighboring states.