UK Increases Humanitarian Aid to Conflict-Torn Syria at Over $3.3 Billion 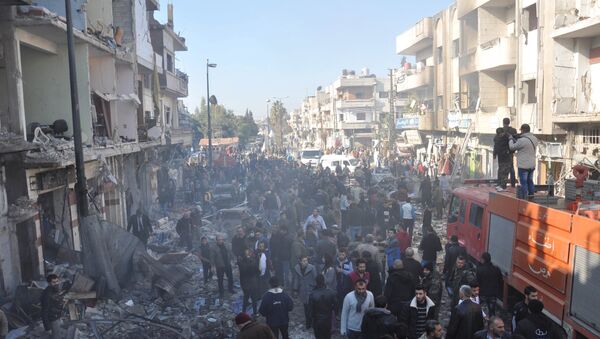 The United Kingdom will allocate at least 1.2 billion British pounds ($1.75 billion) more in aid to conflict-torn Syria, the aid will be allocated over the next 4 years, the office of Prime Minister David Cameron announced.

MOSCOW (Sputnik) – The United Kingdom will allocate at least 1.2 billion British pounds ($1.75 billion) more in aid to conflict-torn Syria and the region, the aid will be allocated over the next 4 years, the office of Prime Minister David Cameron announced.

"The UK has already pledged £1.12bn in the region, making it the second biggest bilateral donor in the world. Today’s announcement will see an extra £1.2bn plus being spent between 2016 and 2020, taking the UK’s total investment to more than £2.3bn [about $3.36 billion]," a Thursday statement from Downing Street says.

According to the statement, the aid will help fund education and jobs and will contribute to humanitarian protection in Syria, Jordan, Lebanon and Turkey.

"Today’s pledge of more than £2.3bn in UK aid sets the standard for the international community – more money is needed to tackle this crisis and it is needed now."

On Thursday, world leaders arrive in London for the 2016 Supporting Syria and the Region Conference, seeking to increase funding for those affected by the Syrian crisis.

Ahead of the conference, which is the fourth of its kind, Downing Street urged participants to double their contributions to humanitarian aid in a bid to meet the United Nations' appeal for $7.73 billion to help in Syria in addition to the $1.23 billion in assistance for countries of the region.

The UN has repeatedly warned that people are dying of hunger and have limited access to medical care in a number of Syrian regions.