Merkel’s Credibility on Line at Syria Donors Meeting in London 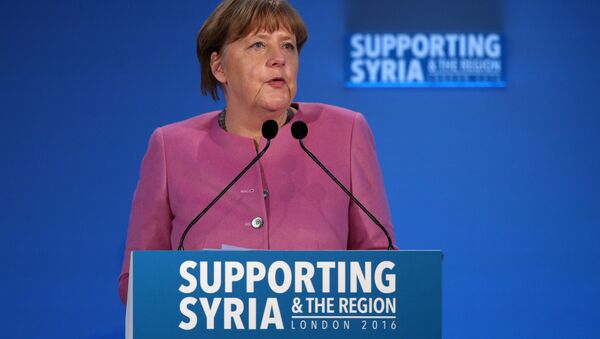 German Chancellor Angela Merkel – already under pressure at home over the refugee crisis – is in London Thursday attending a donors' conference, raising money for Syrian refugees but facing further criticism for exacerbating the situation.

The four Syrian donors' conference, hosted in London by UK Prime Minister David Cameron, was called to raise billions of dollars to bring humanitarian aid to refugees in Syria and displaced in neighboring countries, such as Lebanon, Jordan and Turkey.

Chancellor Merkel: "This is a signal to all Syrians – not just Jordan, Turkey & Lebanon but in Syria – that this conference is to help them"

Merkel was heavily criticized when she announced in summer 2015 that Germany’s doors were open to Syrian refugees, precipitating a huge movement of Syrian from refugee camps in and around the country as well as from inside.

At the time that Merkel made her offer, Cameron said on a visit to Lebanon and Jordan that it was vital to provide support for refugees from Syria's civil war within the region to discourage them from risking their lives in trying to reach Europe.

Look Who's Talking! UK Expects Lebanon to Do More for Syrian Refugees
"It is so important to help keep people close to their homes, clothe them, feed them and house them so they don't take the perilous journey across the seas which has led to such appalling losses of life," Cameron said.

Since then, over a million migrants – mainly from Syria, but also from Iraq and Afghanistan — have made their way into Germany alone, with hundreds of thousands of others distributed around Europe – leading to the partial collapse of the Schengen borderless zone, with many nations erecting border controls in the face of the human tide of migrants.

Writing in the Guardian newspaper ahead of the conference, Cameron said that unless the global community does more to help the countries on the border of Syria, hundreds of thousands of Syrians will continue to "fear they have no alternative but to put their lives in the hands of evil people-smugglers and risk the prospect of freezing to death in the Balkans or drowning in the waters of the Aegean in search of a future".

Ban Ki-moon @UN: "The situation inside Syria is as close to hell as we are likely to find on this earth. It is really heartbreaking."

"The crisis in Syria is about to enter its sixth year. The international community bears a heavy responsibility for failing to end it."

He said the main objective of the conference was to "meet the enormous humanitarian needs — US$8 billion for this year alone".

"Despite the generosity of some donors, the international community has failed to keep pace with these needs."

As Merkel sat with Cameron during the UN Secretary General’s speech, critics back home were questioning the wisdom of her 'open doors' policy which led to the mass movement of people from near their homeland and risking their lives for a new home in Europe.