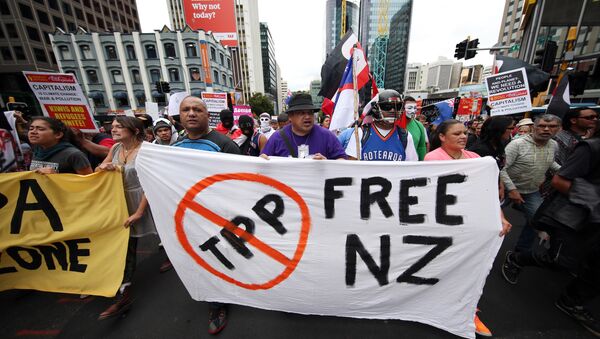 TPP is intended to deregulate trade among signatories – the United States, Australia, New Zealand, Brunei, Canada, Chile, Japan, Malaysia, Mexico, Peru, Singapore and Vietnam – which together make up 40% of the world economy.

Critics of the hotly-debated trade agreement, which was negotiated in unusual secrecy, say the TPP will undermine standards and regulations for environmental protection, health and safety, and workers' rights.

"Basically it eats away at New Zealand's sovereignty and the whole process was undemocratic," Rowan Brooks, one of the organizers of Thursday's protest, told Al Jazeera. "The agreement gives power to corporations and takes it away from the people."

Outside of the Sky City Convention Centre, where the signing took place, thousands of protesters blockaded streets and highway ramps throughout the area, bringing traffic to a standstill.

"It's kind of a Cold War by proxy of trade and investment agreements," another protester, University of Auckland law professor Jane Kelsey, told Al Jazeera. "And that's a real worry because not only do the corporations who have special insights and input to this agreement get to be center stage, but also there is no balance of interests."

The TPP must still be approved domestically by the governments of each signatory nation. In the United States, Congress must ratify the deal. However, US lawmakers are likely to put off considering the deal until after the upcoming presidential election in November.

"Congress holds the trump card on the widely unpopular TPP, so now is the time to urge our representatives to reject the toxic trade deal and build a new model of trade that puts the health and safety of people before the profits of big corporations that are already polluting our air and water."

Sir Graeme Harrison, a New Zealander who supports the deal, said getting approval from US lawmakers is critical to the overall success of the deal.

"To achieve anything that's a wide-ranging, international agreement on trade, especially in agriculture, you must have the United States involved," said Harrison, founder and chairman of meat processor ANZCO Foods.

Harrison suggested that the protests against the trade agreement were "anti-American."